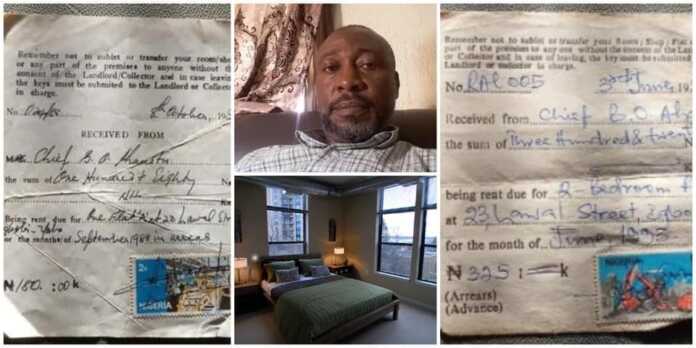 A Nigerian man has set social media buzzing with the shocking discovery he made recently.

The man identified as Chiwueze Ahanotu took to Facebook as he shared photos of two old receipts of two bedroom flats his parents had paid for in the 1800’s.

He lamented the bad turn of things in the country and enquired where the country was headed.

Nigerians took to the comment section to also lament the economic state of things in the country. There were those who said it wasn’t however easy to come by those amount in the 1800’s.

“As at then a brand new 504 Peugeot was 2,500 naira and one dollar was 80 kobo. The thing is that Nigeria never moved forward. Only industrialization could have saved the economy.”
Chiwueze Ahanotu responded:

“We are retrogressing in Nigeria. Definitely.”
Blessing Chidinma said:

“It wasn’t easy to get such amount then.”
Read also

Ojeniyi had shared the receipt of the car purchase and had a question for people, what can one buy with such an amount of money today.

Reacting to the photo, a Facebook user identified as Aliyu Hamagam said the minimum wage in 1982 was N120, suggesting that a Beetle car was expensive back in the day.