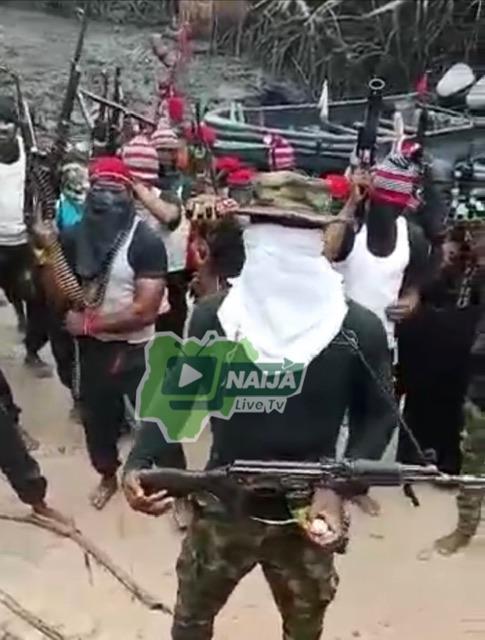 A new militant group, The Force of Egbesu, has surfaced in the creeks of the Niger Delta with stern warnings to President Muhammadu Buhari and state governors to do the needful for the wellbeing of the oil-rich region, or else hell will be let loose during the February general elections in the region.

In an electronic mail and video released weekend, the leader of the group, who identified himself as General Gbolodi, lamented the abandonment meted out to him and his group since 2010 by political leaders on one hand, and the utter neglect of the oil-rich Bassan Clan in the creeks of Niger Delta on the other hand.

The statement reads in part: “I am calling on the PDP and APC leaders who do not want development in the region to quickly make amends, else it will be too late. I want to particularly call on political leaders of PDP and APC in Bayelsa State, that Bashan Clan is blessed with crude oil with no meaningful development, it remains in shanties.

“I’m issuing this message to President Buhari and Gov. Douye Diri, that if you know what to do to remedy the injustices done us and our oil-rich land, then come to us for dialogue. But if you are reluctant to do the needful, I’m coming for you, there shall be no elections in Bassan Clan and other areas in February.

“We are waiting diligently for your understanding, we are waiting for your response to our grievances, that is, the utter neglect and abandonment meted out as punishment to us and the area.

“If it seems good for you to use force on us, we are battle-ready, we’re not afraid of the Pharaohs and Goliaths you have and we’re here waiting for those you will send. We know that death is a syndrome open to all and sundry, we’re ready for war!

“If you failed to reach out to us before the February elections, there will be no elections in Bashan Clan in Southern Ijaw local government area and other parts of the region. Note that it’s not just a threat”.