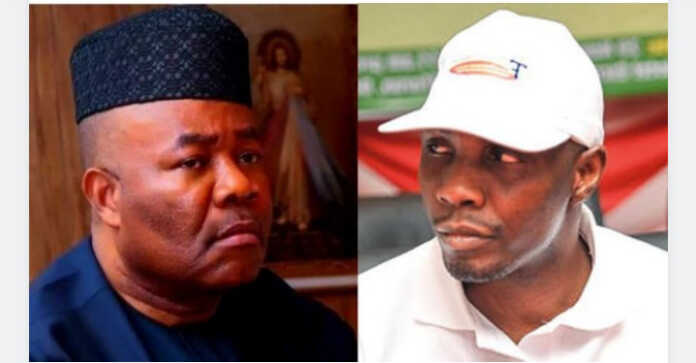 Tension is building again in the oil rich Niger Delta region as the seven-day ultimatum issued by ex-militant warlord, Government Ekpemupolo alias Tompolo for the Federal Government to reconstitute the board of the Niger Delta Development Commission (NDDC) expires today.

Tompolo had last Sunday roared from the creeks, warning of dire consequences should the interventionist agency continue to be operated by a sole administrator which other stakeholders described as a flagrant disregard for the law establishing the commission, and taking the people of the Niger Delta region for a ride.

As a result of the tension generated by Tompolo’s ultimatum, Minister of Niger Delta Affairs, Mr. Godswill Akpabio visited Delta State where he met with some key stakeholders with a view to dousing the rising tension.

But at the closed door meeting with stakeholders held at the palace of the paramount ruler of Gbaramatu Kingdom, the Minister was tongue-lashed for his foot dragging in inaugurating the board.

Sources said the meeting was so heated that at a point Akpabio attempted to stage a walkout.

Tompolo was said to have snubbed the meeting but reportedly sent a message to Akpabio to go back to Abuja and inaugurate the NDDC board without further delay.

Speaking at the meeting, the Delta State Governor, Dr. Ifeanyi Okowa represented by his deputy, Kingsley Otuaro said the position of Delta State Government was that the right thing should be done regarding the NDDC Board in accordance with the Act that established it.

President of Isoko National Youth Assembly (INYA), Amos Ogbokor-Etaluku who also spoke, said the entire youths of the region had aligned themselves with the ultimatum, warning that the safety of oil workers would not be guaranteed in the coming days.

On his part, President of Ijaw National Congress (INC), Prof. Benjamin Okaba expressed dismay that Akpabio was running NDDC with a sole administrator in contravention of the Act establishing it.

Spokesman of Gbaramatu Traditional Council, Chief Godspower Gbenekeme was quoted as expressly telling the Minister that “the people seated here are not IYC executives that you can just call to Abuja.

“The presence of soldiers in our region is not the reason for peace, it is because of our resolve. We want that board to be constituted, the ultimatum stands. After the ultimatum and nothing is done, don’t blame anybody.”

Speaking earlier Akpabio made reference to how war would break out in the Niger Delta if tension continues to grow.

He said that it was necessary for the youths to give peace a chance going by the fragile nature of the Niger Delta region, saying that “we must not allow our region to boil. We must support the Federal Government, particularly this present government.”

He said his visit was primarily to consult the people on the way forward and also to appeal for peace.

It was, however, learnt that the minister left the peace parley at Oporoza with the promise to commence the process of constituting the substantive NDDC board on returning to Abuja.