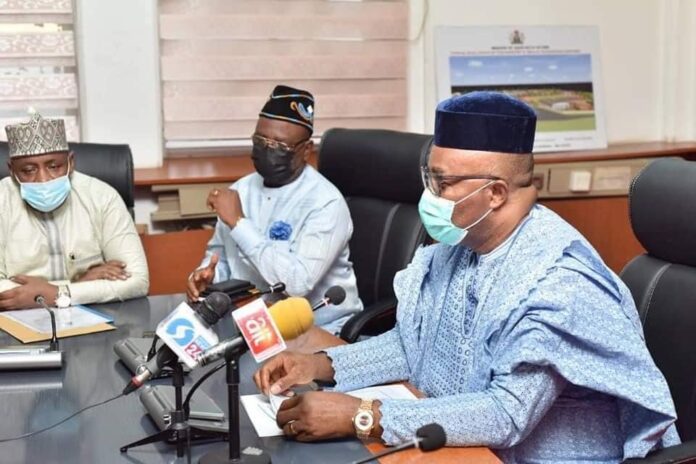 Minister, Niger Delta Affairs Ministry, Senator Godswill Akpabio, on Monday formally declared that the final report of the Forensic Audit into the administration of the Niger Delta Development Commission (NDDC), since its inauguration, has been submitted.

Akpabio made the disclosure while receiving in audience, members of the NDDC Forensic Audit Security Committee, in his office, led by Admiral Bamidele Oluwagbamila.

Speaking shortly after receiving the security report, the Minister thanked members of the committee for their commitment to the success of the exercise, saying” I am delighted to receive your report on this exercise which started in 2020 and ended in July 2021. Though I have not looked at the nitty gritty of the report, but from my observation in your speech, I want to thank you for taking this national assignment seriously.”

This assignment, he stated “was not from us, even though the Ministry supervised it. This assignment was from the President and Commander-in-Chief, Mohammadu Buhari. I want to, on his behalf, thank the security committee.”

The former Senate Minority leader noted that,” from what you have said, it is very clear that you were not only committed to your work, but you also carried out your assignment with professionalism. As you said earlier, there was no incidence concerning the field nor lead auditors at their residences, as well as the communities, either group or individuals. You were able to endear yourselves to the host communities and they, in return, gave you all the support in your assignment.”

According to the former governor of Akwa Ibom State,” to the Glory of God, the Forensic Audit Report is ready for submission to Mr President. It was also important that we also hear from the Security Team, thank them for their comportment, candor and discipline throughout the exercise.”

Akpabio noted that “the Forensic Audit couldn’t have been successful without the involvement of the security agencies. We equally thank you for deeming it necessary to also give your independent report on what you saw, how you saw it and what the situation is in the Niger Delta Region, apart from providing security.

“If there are areas I need to take extracts for the Commander- in-Chief, to take further actions, I will do so. I know that history will remember you for good and what you have done. This exercise definitely is a turning point for the NDDC and the development of the Niger Delta Region,” he stressed.

Earlier in his speech, the leader of the security committee, Admiral Bamidele Oluwagbamila, thanked the President through the Minister for the opportunity given them to contribute their quota to bring about the needed change in the commission saying,” we are very happy to report that after almost over a year after the commencement of this assignment, that job has been successfully completed. We worked with the Auditors and provided them the right environment for them to do their job successfully”.

The Naval Officer stated further, ” we secured them in their hotels and the projects’ site. Throughout the period, we enjoyed the support of the Ministry, which provided all the logistics needed for the job. Over 398 personnel from across the services were engaged for the exercise”.

” This exercise is a big plus for the Ministry of Niger Delta. I want to congratulate the Minister for carrying it out as directed by our Commander-in- Chief. Throughout the duration of the exercise, nobody died and all the property under our care can conveniently be accounted for. Once again, it is a honour and priviledge to have worked with you in this task”, he declared.