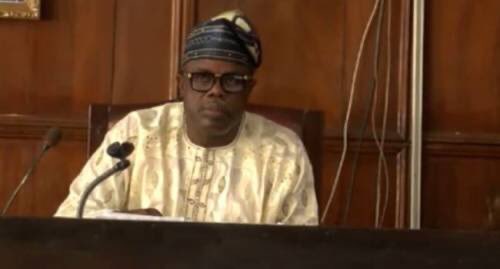 Some policemen were on Monday afternoon seen around the official residence of Speaker of the Ondo State House of Assembly, Bamidele Oleyelogun, at the Alagbaka area of Akure, the state capital.

The policemen, who are mostly from the mobile and anti-riot units, took strategic positions around the house of the Speaker.

NAIJA LIVE TV gathered that the state’s lawmakers were about holding a meeting at the Speaker’s lodge when the policemen stormed the place.

The incident is believed to have been occassioned by the lawmakers insistence to probe the N4.3bn found inside a ‘secret’ account belonging to the state government.

NAIJA LIVE TV had over the weekend gathered that there were plans to forcefully stop the lawmakers from further probing the ‘secret’ account.

The discovery of the account had set the members of the state executive council against the lawmakers, who have vowed to further investigate the discovery.

Efforts by our correspondent to get the reaction of the Assembly spokesperson, Olugbenga Ale, over the presence of the policemen at the Speaker’s residence proved abortive as his mobile were switched off.

Tee-Leo-Ikoro, spokesperson for the Ondo State Police Command, could not also comment on the issue when contacted.

EXCLUSIVE: How N4bn In ‘Secret’ Ondo Government Account Was Uncovered, Transactions Carried Out Without Authorisation