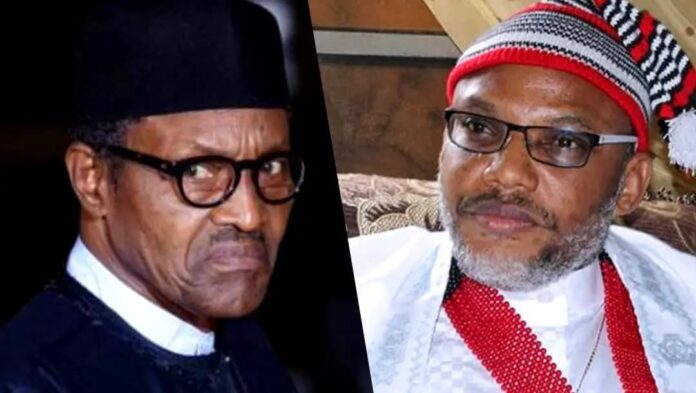 Following the order of the court that, the Leader of the Indigenous People of Biafra, Mazi Nnamdi Kanu, be compensated with N1bn for total violation of his fundamental human rights, Counsel to the Army, Amos Tory, Wednesday said the military would respond after studying the judgement.

Recall that that Abia State High Court sitting in Umuahia, had ordered  the Nigeria Army to pay N1billion compensation to the Leader of the Indigenous People of Biafra, Mazi Nnamdi Kanu for invading his house in September 2017 during Operation Python Dance ii.

The court also ordered the Army and the federal government to apologise to Kanu in three national dailies for the infringement of his fundamental human rights following the September 10, 2017 military invasion of his house.

Justice Benson Anya who gave the orders while delivering judgement on the suit filed by Kanu against the federal government, the Army and six others for allegedly violating his fundamental human rights, declared the raid as unlawful.

Kanu, had through his Special Counsel Aloy Ejimakor, filed a suit against the federal government, the Attorney General of the Federation, Abubakar Malami; the Chief of Army Staff, COAS; and the Inspector General of Police, IG for violating his Fundamental rights.

Other Respondents are the Director General of the Department of State Services, DSS; the Abia State Director of DSS; the state Commissioner of Police; and the Army Brigade Commander, Ohafia.

He sought, among other reliefs, ” a declaration that the military invasion of his building and premises at Isiama, Afaraukwu Ibeku, Abia State on 10th September, 2017 by the Respondents or their agents is illegal, unlawful, unconstitutional and amount to infringement of the Applicant’s fundamental right to life, dignity of his person, his personal liberty and fair hearing as guaranteed under the pertinent provisions of Chapter IV of the Constitution of Federal Republic of Nigeria, 1999 (hereafter, CFRN) and the African Charter on Human and People’s Rights (Ratification and Enforcement) Act (hereafter, the Charter)”.

Justice Anya who read the judgement from 10:05 am to 11:09 am, declared that the issue of military invasion of Kanu’s house on September 10, 2017 “was so notorious that the court cannot turn a blind eye to it”.

He said that the federal government the Army and other security agencies made flimsy and ineffectual denials of their involvement in the said invasion instead of proving otherwise.

Justice Anya held that “Nigeria is an integral part of the comity of democratic nations who must respect human rights”, adding that violence, adoption and torture do not resolve but fertilise conflicts.

The court further advised the federal government to embrace dialogue and political solution in handling the issue of Nnamdi Kanu in the interest of peace.

The court however declined Kanu’s prayer to be returned to Britain, his country of abode before his rendition from Kenya.

It also said that it lacked the competence to abdicate on the issue of Kanu’s “abduction” in Kenya and extraordinary rendition, saying that only Federal High Courts have jurisdiction over extradition matters.

According to the Judge, Kenya is outside the territorial jurisdiction of the court, hence, the court cannot entertain the issue of extradition.

The court also struck out the preliminary objections by the Respondents that a state High Court lacked jurisdiction to entertain suit against agencies of federal government, ruling that the objections were “misconstrued and frivolous”.

Responding, Counsel to the Army, Amos Tory, said he was waiting for the copy of the judgement which he would transmit to his clients for study and determination of the next line of action.

In his response, Ejimakor who led Kanu’s defense team, hailed the judgement, saying it has proved that Kanu contrary to allegation, did not jump bail but only escaped for his dear life.

He said that “the judgement means that the bench warrant against Kanu in Abuja court has to be vacated”.

Ejimakor hailed the courage of the court in declaring the military invasion of Kanu’s house illegal.

On the Court’s decline from abdicating on the issue of Kanu’s rendition for lack of jurisdiction, Ejimakor said the legal team would consider other options after careful study of the judgement.

Meanwhile, the Chairman of Conference of Nigeria Political Parties, CNPP, Ugochinyere Ikenga, who said he was at the court in solidarity for Kanu, urged President Muhamnadu Buhari to heed the advice of the court, Igbo elders and other eminent Nigerians, to embrace dialogue and political solution in Kanu’s matter.

He called for the immediate release of the IPOB Leader, arguing that if the federal government could grant amnesty to bandits, it should not be reluctant to do same to a freedom fighter.

Ikenga, thanked Kanu’s legal team for its efforts, and urged senior Igbo lawyer to join the struggle for Kanu’s defense.

Responding also, the Leader of the Movement for the Sovereign State of Biafra, MASSOB, Mr. Uchenna Madu, applauded the judgement but said it looked like it had a dictation of the powers from above as some of Kanu’s prayers were turned down.

Expressing full solidarity for Kanu, the MASSOB Leader said no amount of intimidation or persecution would suppress the agitation for Biafra.

Igboayaka O Igboayaka with other Igbo youth leaders was at the court to solidarise with Kanu.

Meanwhile, there was heavy security presence at the court premises as all roads leading to the premises were cordoned off, and human and vehicular traffics diverted to alternate routes.