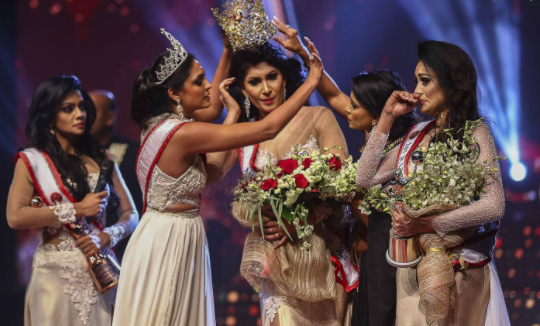 Clutching a bouquet of flowers and wearing a sash that read “Mrs. Sri Lanka,” newly crowned beauty pageant winner Pushpika De Silva blew kisses and waved to the crowd as she glided across the stage.

But on the cusp of a moment the host said “Sri Lanka had been waiting for,” the event was plunged into chaos as Caroline Jurie, who won the pageant in 2019 and the Mrs. World competition in 2020, interrupted the celebrations to brand the winner a divorcée. Jurie then strode over to her, both hands outreached, ready to wrestle back the crown she had helped affix to De Silva’s head just seconds earlier.

She struggled to remove the oversized creation, which creators say was inspired by a peacock and made up of an estimated 3,000 blue and green cubic zirconia and topaz stones.

A stunned De Silva appeared to wince in pain as the tiara rocked back and forth during the unexpected effort to pull it free, her long dark hair becoming tangled — which she said left her with injuries that later required hospital treatment.

“There is a rule that you all have to be married and not divorced,” Jurie said, before snatching removing crown, which creators describe as a “magnificent masterpiece.”

The event, which was held at Colombo’s Nelum Pokuna Mahinda Rajapaksa Theatre over the weekend, was televised Sunday. Footage of the incident shared by the Colombo Gazette, a local news site, has since been viewed more than a million times on YouTube.

A statement released by Mrs. Sri Lanka World said the organization was “deeply disturbed” by the “unfortunate” incident, condemned Jurie’s behavior and confirmed that De Silva was indeed the proper winner. The organization does require contestants to be married. Winners go on to compete in Mrs. World, a global pageant for married women.

Taking to Facebook after the incident, De Silva referred to herself as an “undivorced woman” and said that while she and her partner were currently separated, they remained married. She said the dramatic turn of events over the weekend had been “unexpected” and later said she had forgiven those who wronged her as she was crowned. “Nothing can be won by hate,” she wrote.

“Let it be known, Mrs. World Inc. does not sit in moral judgment,” the organizers’ statement said. “If the delegate sent by Mrs. Sri Lanka-World to compete in the international competition is legally married she will be accepted.”

According to local media, De Silva, who fled Sunday’s ceremony in tears, had the crown returned to her Tuesday. Officials said Jurie has been asked to apologize to De Silva for her outburst.