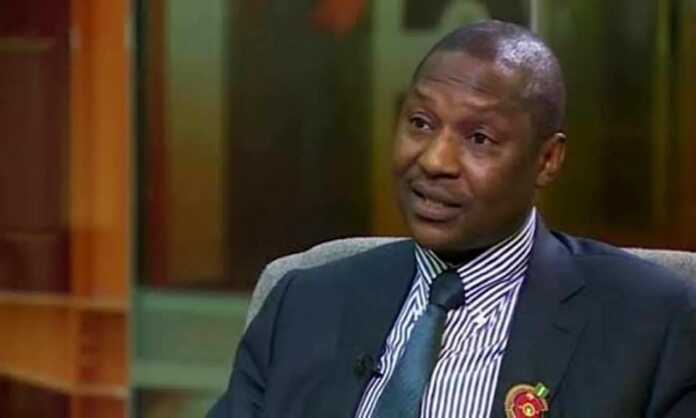 The Attorney-General of the Federation and Minister of Justice, Mr. Abubakar Malami, has described as false and fictitious, a report alleging that he sent a secret memo to President Muhammadu Buhari, urging him to suspend the 1999 Constitution and declare martial law in the country.

Martial law involves temporary imposition of military authority to take over normal civilian functions after the suspension of civil law by a government.

It is usually invoked in time of war, rebellion, or natural disaster.

When martial law is in effect, the military commander of an area has unlimited authority to make and enforce laws as situations demand.

An online media outlet had on Wednesday, claimed that it exclusively obtained a copy of a secret memo that contained a legal advice Malami sent to President Buhari, asking him to prompty suspend the operation of Chapter IV of the Constitution which guaranteed the fundamental rights of all Nigerian citizens.

The online newspaper further claimed that Malami had in the eight-paged secret memo dated May 4, told President Buhari that insecurity across the country has reached a level that could no longer be checked by existing democratic techniques, insisting that only a state of emergency promulgated by the President could return the country to tranquillity.

It quoted Malami to have stated in the memo that, “the essence of the declaration is to allow for suspension of constitutional and legal bureaucratic bottlenecks pertaining to matters of National Security with particular regards to fundamental rights guaranteed under Chapter IV of the 1999 Constitution and processes and procedures relating to procurements, among others”.

The online tabloid further alleged that Malami fingered prominent separatist agitators like Sunday Igboho and Nnamdi Kanu as persons fueling insurrection in parts of the country, and argued that the best way to handle them was to declare martial law in the country.

However, the AGF, in a statement that was signed by his Special Assistant on Media and Public Relations, Dr. Umar Gwandu, denied giving such legal advice to President Buhari.

Malami said he remained a democrat that believes in the rule of law, tenets of democracy and constitutional order.

He said it was antithetical to common sense for anyone to think that the holder of such coveted office as the Attorney-General of the Federation and Minister of Justice, would stoop to what was claimed by the online media outlet.

Malami’s statement, read: “The attention of the Office of the Honourable Attorney General of the Federation and Minister of Justice, Abubakar Malami,SAN has been drawn to a false and fictitious report alleging that  there was a secret memo emanating from the Office to the Presidency.

“General publics are hereby asked to disregard the media report as fabrications of anti-constitutional democratic stability in Nigeria.

“Malami remains a true democrat who believes in rules of law and tenant of democracy and Constitutional order.

“The Office of the Attorney-General of the Federation and Minister of Justice is a constitutionally recognised one with its role and responsibilities embedded in the constitution.

“It is antithetical to common sense to think that the holder of such coveted Office as the Attorney-General of the Federation and Minister of Justice will stoop to what was printed by the media.

“The Government does not operate in secrecy as it is not a clandestine operation. Hence, Malami discharges his constitutionally recognized mandates in compliance with principles of transparency, openness and accountability”.