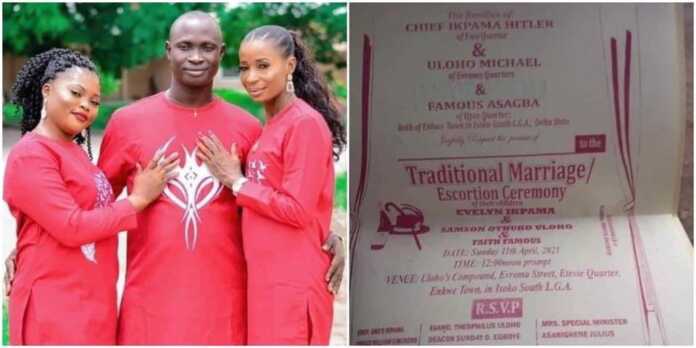 A Nigerian man from Delta state, Samson Uthuko Uloho, seems to have found his missing rib in two places

Love is a very beautiful emotion and it’s often said that a man who finds a wife has found a good thing. Well, a Nigerian man identified as Samson Uthuko Uloho seems to have found good things.

News recently made the rounds of the man getting set to marry two ladies on the same day.

A pre-wedding photo shoot of the ‘blended couple’ recently went viral on social media. Interestingly, they all rocked a matching red outfit with white detailing.

According to information gathered from their wedding invitation, Samson is going to traditionally wed Evelyn Ikampa and Faith Famous on April 11.

In no time, internet users got wind of the wedding and they shared their take on social media. Read what some of them had to say below:

Halimadiejomaoh:
“If he was only sleeping with them ,nobody would’ve carried it as news. May almighty Allah bless you with happiness in your marriage , Aameen “
Beckyuae:
“Very big congratulations  kudos to you too Many women outhere exactly what should be done now “

Alexandriam_2:
“That’s man with a big appetite and not ashamed of it. “

“Love is a wonderful thing”
This tweep called Samson a man with a good heart:

“Why I Divorce my Wife Melinda” – Bill Gates hints