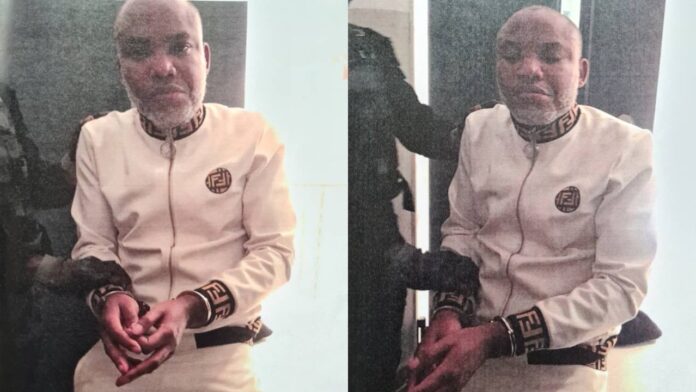 A Kenyan journalist, Dr David Matsanga, has reacted to reports of his involvement in the arrest of Nnamdi Kanu, leader of the Indigenous People of Biafra, IPOB.

The Indigenous People of Biafra, IPOB, had disclosed that its leader, Nnamdi Kanu was arrested in Kenya.

There were speculations that a Kenya media and authorities hands in the arrest of the IPOB leader.

IPOB alleged that the Kenyan Government and President Uhuru Kenyetta betrayed Kanu in order to get the N100 million bounty placed on him (Kanu) by a Coalition of Northern groups earlier in the month.

However, a renowned Kenyan Journalist and founder of Punchline Africa TV has denied luring Nnamdi Kanu to Kenya in order to be abducted.

In a video posted by Reno Omokri on his Instagram page, Dr Matsanga denied any involvement in the arrest of Kanu even as he urged the government to be fair to the IPOB leader.

The Kenyan journalist disclosed that the last time he spoke with Kanu was on the 21st of May, 2021 when he was interviewed on his TV station.

He said: “My attention has been drawn to the propaganda circulating on social media, originating from Nigeria talking about abduction by Nigerian security agencies with international agencies of Nnamdi Kanu.

“As a result of the propaganda by the Buhari regime that he was taken from Kenya, Nnamdi Kanu was interviewed on 21st of May on my network and that was the last time I spoke to him.

“We did not approach Kanu for the interview, he did through his representative in Australia in May, asking for the IPOB leader to be interviewed on our television station. My TV does not harbour conspiracy theory but speaks the truth regarding the suffering of the people of Biafra. We took interest in Biafra and southeastern issues because of the millions of videos sent to us.

“I ask God to take me if Kanu says he ever spoke to me since 21st May, I want to make it clear that the abduction of Kanu will not deter my TV from speaking on the poor and ill-treatment of the people of Biafra

“I am not a Nigerian or paid by Biafra, I’m a highly investigative journalist and don’t engage myself in activities of Buhari government. We are waiting to hear about how he was arrested just as everyone is and we have no hand in his arrest.

“We wish the Nigerian government gives Nnamdi Kanu a fair trial and does not trample over his right or harm him.

“We wish the government does not stop him from disclosing how he was abducted.”