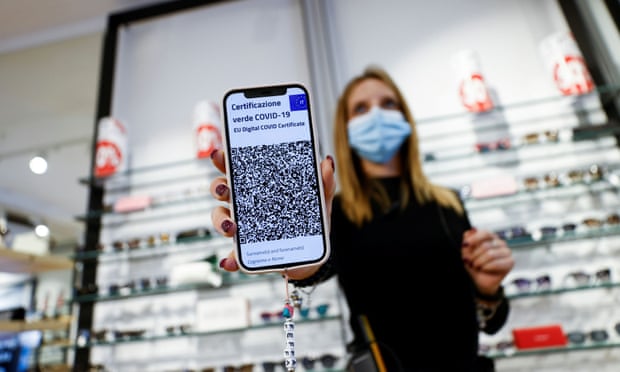 Italy is bracing itself for further unrest and labour market mayhem as the strictest vaccine mandate in Europe takes effect on Friday.

All workers will be obliged to present a coronavirus health pass before entering their workplaces, a move that is expected to leave some industries struggling with staff shortages.
The measure, an expansion of the “green pass” introduced in August, will require public and private sector workers to have been double vaccinated, to show proof of a negative test taken within the previous 48 hours or of having recently recovered from Covid-19.

Those who flout the rules face being suspended without pay or fined up to €1,500 (£1,270). Employers face fines for failing to check if staff are complying. More than 80% of the population over the age of 12 has been double-vaccinated and the majority of Italians have taken the green pass – also required for dining inside restaurants, entering museums, theatres and cinemas, and for use on planes and long-distance trains – in their stride.

However, protests over the workplace rule have gathered pace in recent weeks, with a demonstration in Rome last weekend turning violent as neofascist groups exploited the discontent.
The motive behind Italy’s green pass is to boost inoculations and contain infections in the hope of avoiding another lockdown.
Although there was an increase in the number of people booking vaccinations when the measure was first announced, especially among young people, an estimated 2.5 million workers have not yet had the jab. The majority of those refusing the vaccination are over the age of 50.

The issue has caused divisions among workers, with some vaccinated people choosing to stay away from the workplace due to the presence of non-vaccinated colleagues.

Confindustria, the Italian business lobby, strongly supports the workplace measure. However, various industries are envisaging staff shortages from Friday as workers hold strikes or simply choose to stay home.
Which European countries are being hit the hardest?

Port workers across Italy have threatened to go on strike, while the transport sector is facing a potential shortage of 130,000 workers.

“Out of 400,000 drivers, we estimate that 30% do not have the green pass,” said Ivano Russo, the director general of Confetra, the transport and logistics federation. “On top of that, we fear for the foreign workers, many of whom have been vaccinated with Sputnik or other vaccines not approved by the European or Italian medicines agencies. We therefore foresee a risk of severe blockage in the sector.”

The agriculture sector is facing a similar dilemma with foreign farm workers, the majority coming from eastern Europe, who have had the unapproved Sputnik vaccine.
Meanwhile, an estimated 20% of Italy’s police force are unvaccinated, as are between 10% and 20% of public transport workers.

Bar and restaurant workers also require the pass, although industry officials say vaccine take-up has been high in a sector that was severely affected by lockdowns.

Green pass opponents are planning further protests over the next few days. Meanwhile, CGIL, Italy’s oldest trade union, has organised a demonstration against fascism in Rome on Saturday after its headquarters were ransacked by neofascists during the green pass protests last weekend.

The violence prompted calls for the extreme right party Forza Nuova and other neofascist movements to be banned.