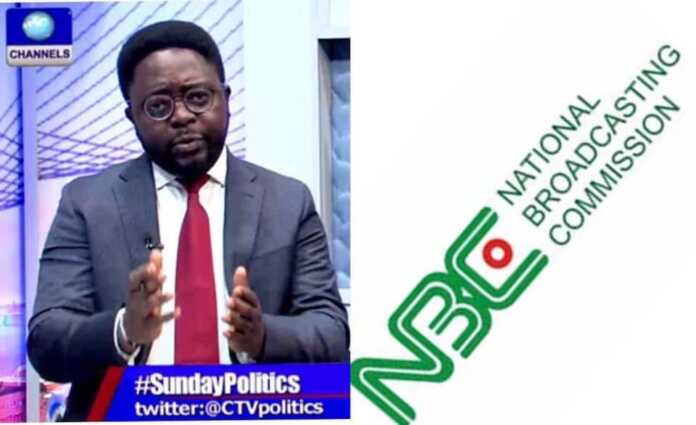 Despite widespread criticism that trailed its earlier reprimand of Channels TV for granting leader of the Indigenous Peoples of Biafra, IPOB, the National Broadcasting Commission (NBC) has finally asked Channels Television to pay a fine of N5 million for breaching the broadcast code.

Recall that the Commission had last week queried Channels Television after Emma Powerful, a leader of the proscribed Indigenous People of Biafra (IPOB), was interviewed on its live programme, ‘‘Politics Today’’, on Monday, April 26th.

Following the news of its action, the NBC faced wide condemnation by many Nigerians who viewed the alleged suspension of Channels TV by the NBC as an attack on media freedom and independence.

In the letter addressed to Channels TV Managing Director on Monday, the NBC accused the station of promoting content liable to incite hatred and sectionalism by tolerating the IPOB spokesman’s “derogatory, false and misleading statements” which is in violation of Sections 3.11.1(b) and 5.4.3 of broadcasting Act.

But on Tuesday, April 27th, the NBC denied suspending the TV station, claiming that it only warned it and did not suspend the station’s operations over the broadcast of an interview with a leader of an outlawed group, IPOB.

NBC, however, said the TV station apologised for breaching the code.

In a statement on Thursday, NBC acting director-general, Armstrong Idachaba, said the sections of the code breached by the stations are “class A” offences which attracts the “immediate order of suspension of broadcast services; suspension of licence and immediate shut down”.

According to Idachaba, NBC reviewed the appeals of both stations and decided to set aside the option of suspension of licence.

“The NBC has reviewed the appeals and apologies from both stations, and has decided to set aside the option of suspension of licence,” he said.

“The commission has, however, directed both stations to pay N5 million penalty each to serve as a deterrent.”

The NBC boss, however, warned broadcasters to desist from endangering security of the nation by giving voice to “terrorist organisations”.