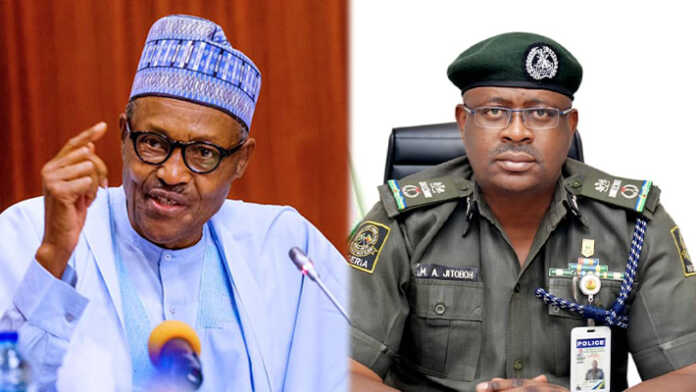 The Deputy Inspector-General of Police in Charge of Department of Research and Planning, Moses Ambakina Jitoboh has assured Nigerians that President Muhammad Buhari is committed to bringing peace to the South-East and other parts of the country breached by criminal elements in the last few weeks.

According to DIG Moses Ambakina Jitoboh, the present administration of President Buhari in collaboration with the Inspector-General of Police, Usman Alkali Baba in their efforts to ensure the country remain one has set up a Presidential Task Force tagged Operation Restore Peace and deppen the community policing in every communities in the country.

The Deputy Inspector General, Moses Ambakina Jitoboh,who made this known yesterday during an interactive session with officers, rank and file of the Bayelsa State Police Command, said the phase in which police architectures are attacked and destroyed is over in the country.

Jetoboh also rated Bayelsa as the safest in terms of attacks on police formations and killing of police personnel, insisting that the state has not recorded any case of secessionist action and has remained the safest.

According to him, ”Police will ever remain the friend of the people. The constitution guarantee the power of every Nigerian to be a police and make arrest. As you witness a crime, you can make arrest. It confer on you the security privilege to make citizen arrest and call in the police.”

Earlier in his speech, the State Commissioner of Police, Mike Okoli attributed the peace existing in the state to the genuine partnership between the police formations and stakeholders in the state including the administration of Governor Douye Diri.

Okoli said the new slogan among the police is “Never Again”,” Never again would men of the Police be slaughtered like chickens. Never again shall the Police Infrastructure be destroyed. We are thankful that no police officer lost his life in Bayelsa even during the #EndSars# protests that rocked every parts of the country. It came due to the efforts of the stakeholders with information dissemination.”

Okoli also commended the residents of the State for not allowing criminal elements infiltrate their midst to perpetuate the destruction of police formations, “the people of the state stood their grounds in support of the Police during the incessant attacks of police infrastructures.”

Also speaking, the representatives of the National Union of Road Transport Workers (NURTW), Comrade Ojo Rapheal, the Ijaw Youths Council (IYC),Central Zone, Comrade Gabriel Agbakiri and the State Chairman of the Police Community Relations Committee(PCRC),HRH King Samuel Earnest agreed that the robust relationship between the stakeholders and the State Police Command ensured that the secessionist moves are thwarted against the state.