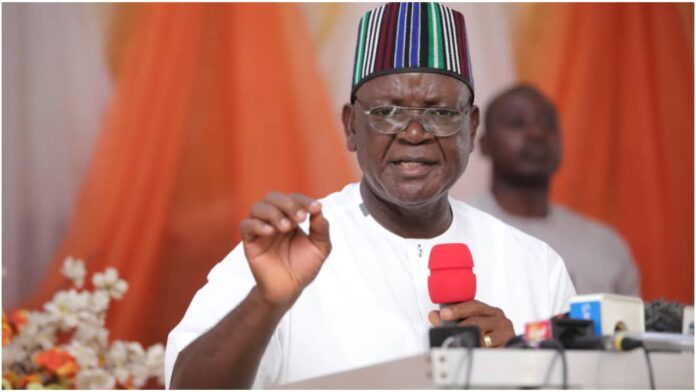 Benue State Governor, Samuel Ortom says the narrative by the presidency that his position on the state of the nation amounts to preaching genocide in the country does not hold water.

The Governor said rather, the Federal Government through the presidency is promoting genocide by deliberately nicknaming Fulani Militia killers across the country as bandits in order to hide their identity, stressing that doing so would only aggravate killings and food insecurity.

Governor Ortom spoke on Saturday in Gboko during the closing ceremony of prayer, praises and thanksgiving for God to address the challenges confronting the Tiv nation and Nigeria at large.

He stated that frantic efforts must be made by the presidency to reengineer Nigeria’s security architecture in order to stop the genocide and as well guarantee human and food security in Nigeria.

The Governor said the one week prayers, praises and thanksgiving to God would not go in vain as God would cause a remarkable thing to happen in Tiv land, Benue and Nigeria at large.

He, however, charged the Tiv nation to persevere in prayers and increase their faith in God but garnish same with works as faith without works is dead.

Tor Tiv, Professor James Ayatse expressed delight over the success of the event and charged Churches in Tiv land to set aside a day monthly to pray, praise and thank God on behalf of the Tiv nation, stressing that God deserves praises at all times.

The paramount ruler warned that any of his subjects who partake in the shedding of Tiv blood for whatever reasons would not prosper and prayed that under his kingship, God would raise a Tiv man to become the President of Nigeria.

Chairman Christian Association of Nigeria, CAN, Rev Akpen Leva said the programme was unique and different from previous ones since he mounted the saddle, saying it was revealed during the weeklong event that God would emancipate Nigeria through the Tiv Nation.

Bishop Mike Angou in a homily said the meeting was the beginning of a spiritual battle against enemies of Tiv nation and Benue State at large, adding that God would cause enemies of the land to scatter in different directions.

VIDEO: Buhari Is Pushing Me To Believe What Nnamdi Kanu Said in 2014 is True – Gov Ortom Blows Hot Again