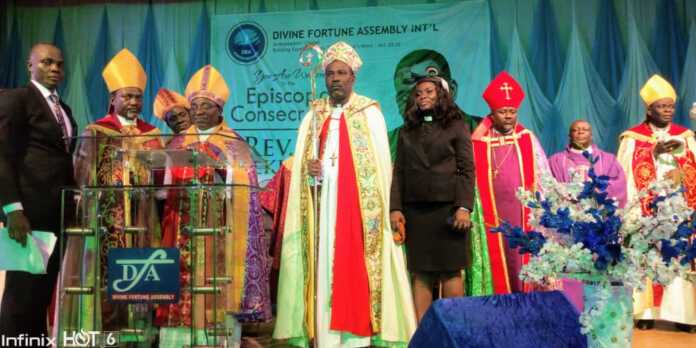 A member of the International Covenant Ministerial Council (ICMC), Bishop Ken Esekhaigbe has urge President Muhammadu Buhari and the State Governors should write their names in gold by checkmating the rising insecurity and killings in some parts of the country to ensure the lives of the citizenry are protected.

According to Esekhaigbe, though the present administrations of President Muhammadu Buhari may have reportedly done numerous infrastructural projects, the decision to tackle the rising insecurity, killings and attacks will provide the best opportunity for him and other state governors to be judge by those who elected them into office.

Bishop Ken Esekhaigbe, who made this known in Yenagoa at the weekend after he was ordained a Bishop by the International Covenant Ministerial Council (ICMC) in conjunction with the Salem College of Bishops, said this is the best opportunity for President Muhammadu Buhari and the State Governors to write their names in Gold by putting a stop to the wanton killings and insecurity in some parts of the country.

Esekhaigbe, who is also the general Overseer of the Divine Fortune Assembly, International, said “Buhari should remember that he has the opportunity to serve the country well now. After now, he will only be remembered for the good he did and for how he led the nation. So, I will advise that now that he has the opportunity he should do the right thing and make sure that posterity speak on its behalf and there will be positive response even to the governors at the states”.

He called on security personnel to desist from cooperating with hoodlums and destructive elements to perpetuate insecurity actions in the country, urging that, they should begin to see the purpose of nation building and also help to protect the lives and property of Nigerian citizens.

He also called on religious leaders, particularly of the Christian Faith, to unite and assist those in position of power to tackle issues of insecurity,” The church has a responsibility to reunite, to revive and to rebuild the people because if we have people with positive understanding then the crime rate will also be minimal and destructive rate will not be there so I think we need to concentrate on making disciples rather than church activities and that’s one major key”.

Ealier in his sermon, the presiding Archbishop of the Foundation Faith Church, Archbishop Sam Amaga expressed concern over the diminishing influence of religious leaders on the issue of security in the country, alleging that the religious leaders have allowed politics, attacks and kidnapping wittle down the zeal to be prayerful and change the worrisome course of insecurity in the country.

Archbishop Amaga called on religious leaders, particularly of the Christian faith,to focus more on building the church through exemplary life and open display of the love for God rather than display of things of vanity.