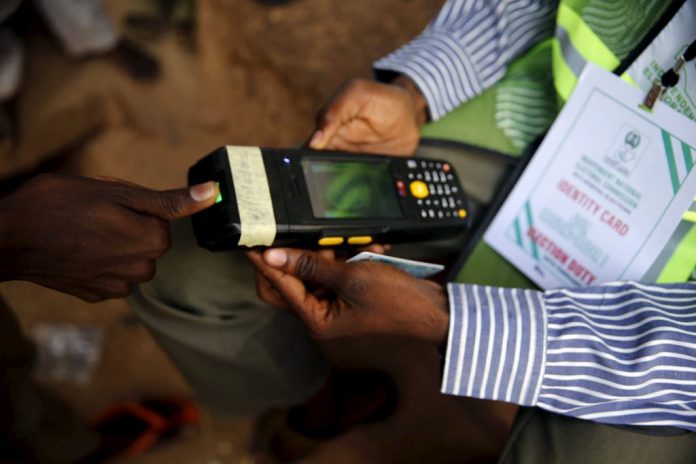 The Independent National Electoral Commission (INEC) will use card readers during the 2019 general elections but ruled out the electronic transmission of results.

This is coming days after President Muhammadu Buhari’s rejection of the Electoral Act amendment bill sent to him by the National Assembly.

However, INEC chairman Prof ‎Mahmud Yakubu said the commission would deploy card readers in every polling unit in the country just as it did in 2015.

Yakubu, who spoke during the public hearing on the menace of vote buying and improving the country’s electoral processes, said the commission had finished all preparations towards the use of the card reader.

The public hearing was organised by the joint National Assembly committee on electoral matters and political parties’ affairs jointly chaired by Sen Suleiman Nazif Gamawa (PDP, Bauchi) and Rep Aishatu Jibril Dukku (APC, Gombe) respectively. However, the INEC chairman said the commission was yet to configure the card readers to match specific polling units, noting that INEC will do that in the coming weeks.

Responding to questions from some senators and stakeholders, Prof Yakubu said: “For those talking about whether INEC would use card reader during the 2019 elections or not, I want to assure that INEC will deploy card reader in every polling unit in the country.

“This is an assurance from the commission, and we are ever ready to do that, although we are yet to configure the card readers to match every polling unit.”

‎Senate President Bukola Saraki, had while declaring the hearing open, urged INEC, security agencies and other stakeholders to ensure free, fair and credible polls in 2019.

He said INEC should improve on the unprecedented record it set during the 2015 elections, pointing out vote buying is currently one of the most disturbing challenges of Nigeria’s political process.

The joint committee chairmen, Gamawa and Dukku said the public hearing was organised to give Nigerians an opportunity to suggest possible ways of tackling vote buying.

Disquiet over electronic transmission of results

But Daily Trust reports that beyond the issue of card reader, the leadership of the two chambers of the National Assembly, led by Senate President Bukola Saraki and Speaker Yakubu Dogara, with acting support of the leadership of the opposition Peoples Democratic Party (PDP) want the amended Electoral Act assented to so that other issues including electronic transmission of results would be backed by law and therefore mandatory.

It was gathered that the PDP leaders had at a recent meeting with other stakeholders in the electoral process expressed fears that besides the reasons given by President Muhammadu Buhari for not assenting to the Electoral Act amendment, the Presidency and the ruling All Progressives Congress (APC) do not want the new electoral act for now simply because they have perfected plans to rig the 2019 elections.

But other sources said the Presidency and the APC had also uncovered plans by the PDP that once electronic transmission of results is approved, the opposition party, with active connivance with some foreign ICT experts would hack into INEC server and tamper with the results to its advantage.

Speaking on electronic transmission of results, the latest copy of the new Electoral Act rejected by President Buhari said:    Section 63 (4) of the Principal Act is amended as follows:

“(4) Presiding Officer shall announce the result at the polling unit and transmit the same in the manner prescribed by the Commission”.

Insert after section 65 of the Principal Act, a new section “65A” —

On the allegations that INEC website could be hacked in the event the 2019 election results would be announced electronically, the spokesman of INEC chairman, Mr Rotimi Oyekanmi, said there would be no direct transmission, adding that the commission’s website is difficult to be compromised.

“We are putting every measure in place to ensure that the INEC website is not hacked. Learning from the experiences of others, our processes will not be based solely on technology.

“If it is the results, there is no result that will be announced without the authentication of the hard copy or the paper trail,” he said.

The PDP National Publicity Secretary, Kola Ologbondiyan, described the allegation that opposition party was planning to hack INEC website as a figment of the imagination of the APC leaders and the Presidency.

In a telephone interview, he said, “It is totally a misplaced allegation. It is a cooked-up story, a fabrication, deception which Nigerians already know are in the character of the APC and its leadership.

“How does it make sense to you and to any Nigerian to say that a proposal is being plotted to crash it (INEC server) or to hack into it? It doesn’t make sense.

“The candid advice of the party to the APC and the Buhari Presidency is that they should answer questions bothering on the referendum of the 2019 general elections.

“We are not prepared as a party and our presidential candidate is also not prepared to get into personal issues; issues that will not benefit the ordinary Nigerians.

“Our campaigns are issue-based and we don’t want any distractions. We are focused and committed to reclaiming power in 2019 in a free, fair and transparent manner,” he said.

For its part, the APC says that it is not afraid of the use of card reader or any other technological means for the conduct of 2019 general elections contrary to the notion being branded by the PDP.  The APC National Publicity Secretary, Malam Lanre Issa-Onilu, in a phone interview with Daily Trust, said President Muhammadu Buhari was the first person to inform the federal lawmakers to include the card reader in the first amended bill sent to him.

On the insinuation that the PDP was pursuing an agenda to hack the INEC website to tamper with the election results, the APC spokesman said, “PDP is capable of all sorts of evil. We are not putting anything beyond them. The desperation they have shown so far is enough for us to be on our guard. We have always been on our guard.

“But the fact that they have even been so desperate, we have everything to make sure we scrutinise every statement they make and every action they take because they are capable of all sorts of evil.”

Also, INEC has announced the abolition of the use of Incidence Form which is being used to accredit prospective voters when the card reader fails.

Represented by Festus Okoye, a national commissioner in the commission, Prof. Yakubu said, “The upgraded Smart Card Readers is faster, more robust and has new features that enable it to store additional data and transmit results.”

Answering questions on how the electoral body would handle Smart Card Reader possible failure to authenticate a voter’s biometrics, Okoye said there was a provision on the redesigned Voters Register where the voter would thumbprint and provide telephone number after meeting several conditions.

“For the 2019 elections, what we are going to do is that we are not going to have the incidence form because we have redesigned the Voter’s Register to have a provision where you are going to thumbprint and put your telephone number so that when we are doing forensic audit, we will be in the position to know what we have in the Voter’s Register and Smart Card Reader and what the challenge is with the voter.”

REVEALED: HOW IMO INEC STAFF ARE ENJOYING THE DIVIDENDS OF 2019 ELECTORAL FRAUD