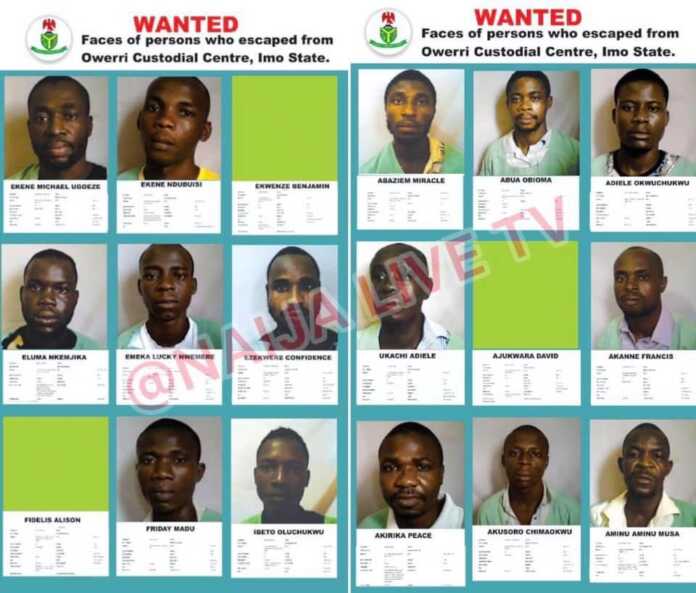 The Nigerian Correctional Service has released the names and photos of some of the inmates who escaped from the Owerri Custodial Centre in Imo State on April 5.

NAIJA LIVE TV reported that 1,884 inmates were freed when the centre was attacked by gunmen.

One of the escaped inmates, David Ubong, a native of Ibaka in Mbo Local Government Area of Akwa Ibom State, was arrested on Tuesday by operatives of the Akwa Ibom State Police Command, The PUNCH reported.

Giving an update, the Controller of Correction (PRO), OF Enobore, in a statement on Wednesday said some of the escaped inmates returned voluntarily while some were recaptured.

“As at 1550hrs today, 7th April 2021, the Centre has recovered a total of 48 inmates who escaped in the wake of the invasion thus increasing the number of inmates presently in custody to 84, including those that resisted the temptation to escape during the attack. Among the escapees, 11 were recaptured by men of the 211 Nigerian Airforce Base, Owerri while others either came back on their own volition or were returned by their relations, traditional rulers and religious leaders,” the statement partly read.

NCS has now released names and photos of some of the inmates who are still at large.

“Faces of persons who escaped from Owerri Custodial Centre, Imo State. Please note that more photographs of the escapees on the way and efforts are on to get clear pictures for the black spaces,” the NCS said in a tweet.