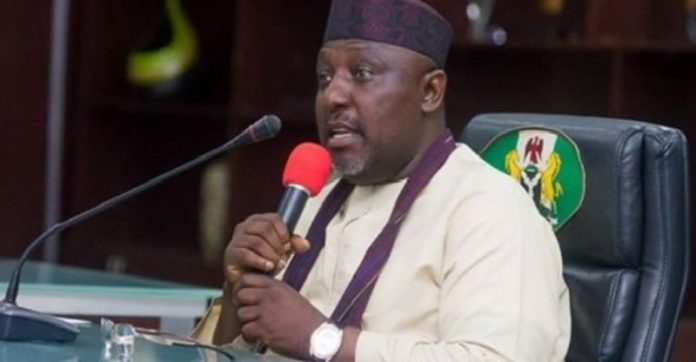 Former Governor of Imo state and Senator representing Imo West, Owelle Rochas Okorocha has revealed how he proposed the current name of Nigeria’s ruling party, the All Progressives Congress APC, saying those who founded the party and built it to its current status must be respected.

Okorocha stated this yesterday when he led the Imo APC Pioneer Group to the party’s national secretariat to ask its leadership to obey the court judgment on the rightful chairman of the party in the state.

He also asked for the extension of the membership registration and revalidation exercise in Imo, saying many of the chieftains were yet to register. The party had since Tuesday extended the exercise.

Addressing journalists, Okorocha said; “We are here because of what is happening in Imo state. Primarily, things are not going right in the state as it affects the party. We are concerned about the upcoming Congresses. Certain things need to be put in place before Congresses as it affects registration and others.

“There has been an issue about the elected excos of the party in the state. The elected excos have not been allowed to function. We are here to bring the party’s attention to it. And we know that our party is a law-abiding party. A party of rule of law. We have come to ask the party to obey the court judgment that established the right executive in the state which has not been upturned by any court.

“That court judgment said Daniel Nwafor excos are the authentic and elected members of the executive and the judge ruled that not even the NEC of the APC can dissolve them. The judgment has been there up to the Court of Appeal and there has not been any other court judgment.

Everybody that became anything in the North came in the favour of President Muhammadu Buhari. But we from the South East saw the name Buhari as taboo at that time. Most people never believed in the party.

“The party should be seen to remember those who founded the party. We joined the party because of justice and it must be seen to prevail all the time at all levels.

We are here to remind the party and we pray that the party will give it adequate attention that it deserves by first and foremost, allowing the leaders of the party to go and register. How can you have a congress coming without having the leaders like Senator Ararume, Chairman of the party are not registered yet? We have five honourable members here.

If the five members here are not registered, what are we talking about? We are here to advise the party to do the needful and obey the court judgment so that the world will not see our party as a party that doesn’t obey court judgment or respect court judgment”.