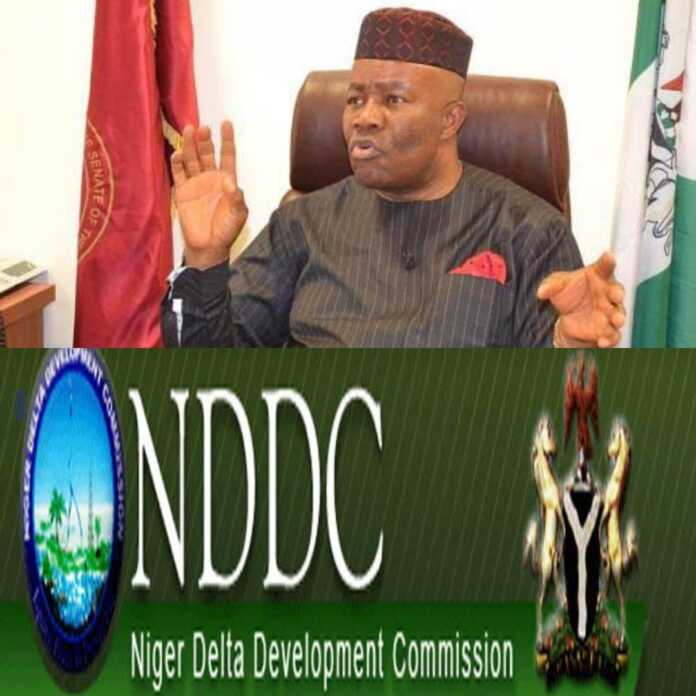 Ijaw Youths under the aegis of the Ijaw Youths Council (IYC) worldwide have accused the Minister of Niger Delta Affairs, Senator Godswill Akpabio over alleged conduct of an unending forensic audit and illegal extension of the tenure of the sole administrator of the Niger Delta Development Commission (NDDC), Mr. Efiong Akwa, alleging that the tenure extension of the sole administrator is a deliberate attempt to delay the constitution of a substantive NDDC board.

According to the ijaw Youths, though the conduct of the forensic audit was ordered by President Muhammadu Buhari and supported by the stakeholders from the region, Senator Godswill Akpabio has turned the forensic audit to an unending exercise used to perpetuate corruption and further bleed the commission of scarce funds.

The spokesman of the IYC, Comrade Ebilade Ekerefe, who made the statement in Yenagoa, said instead of the submission of the audit report to President Muhammadu Buhari in April as promised and the constitution of the substantive board as demanded by stakeholders of the region, the Minister of Niger Delta Affairs, Senator Godswill Akpabio has rather extended the date for the submission of the audit report from April to July and surreptitiously extended the tenure of the sole administrator. “This is totally unacceptable and will be resisted.” He said.

Comr. Ebilade pointed out that preliminary investigation by Ijaw Youths have shown that the Minister of Niger Delta Affairs, Senator Godswill Akpabio and his cohorts have deliberately usurped the powers of the President and had turned the NDDC into an haven of monumental corruption as evident on the shady deals currently going on in the commission which has continually provoked well-meaning stakeholders of the region.

He said that in the light of the above, Ijaw Youths have lost confidence in any report that will be submitted to President Buhari from the shady and unending forensic audit. In his words; “We no longer have confidence in the forensic audit because it is a mere ploy to pocket the NDDC under the whims and caprices of the Minister in perpetuity. We opine that the governors of the South-South region under the Chairmanship of Dr. Ifeanyi Okowa should immediately send a strong delegation to President Buhari and restate the position of the region over our displeasure and warn of the impending danger of not appointing a substantive board at a time other parts of the Country are facing serious security crisis.

Comr. Ebilade said that from the beginning, Ijaw youths knew of the antics of the Honorable Minister which was why they embarked on a peaceful protest last year December at the East-West road to express their concerns, but stated that fifth columnist because of selfish interest within the region emboldened the Minister to legitimize the illegitimate and today, they all disappointed and are now ready to join them in solidarity to resume the “mother of all protest to the NDDC headquarters and other strategic federal government agencies in the Niger Delta to demand for a Governing Board.

“For us in the IYC, we’ve finished consultations with all critical stakeholders of the region and we shall be meeting to review the suspended protest action and very soon we shall inform the public on our plans.”