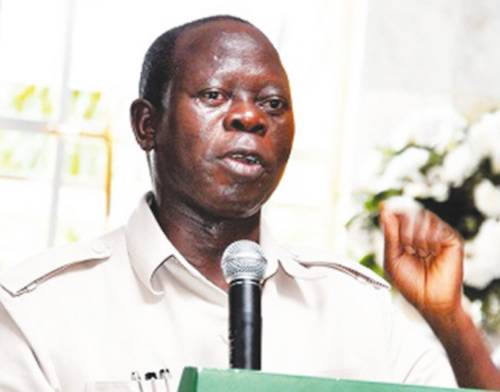 Former Edo Governor, Adams Oshiomhole, has said that he will ensure party supremacy if elected as the national chairman of the All Progressives Congress at its National Convention scheduled to hold on Saturday.

He stated this on Wednesday in Abuja when he had an interactive session with APC young stakeholders.

Oshiomohole stressed that it was the duty of political parties, particularly a governing party to have policies on the economy, social policies and policies that would determine how the society is organised and run.

He maintained that if elected, he would subject the president and other elected officers to the dictates of the party.

He specifically said that his leadership would be clear on issues of the economy and governance and would promote core values of progressive governance.

“My hope is that, if by the special grace of God I become the APC National Chairman, we will need to be very clear about all these and other issues.

“Anyone elected on our platform, including the President will be expected to conduct government and governance in a way that promotes the core values of progressive governance,” he said.

He decried the promotion of ethnic and religious matters by major political parties in the country.

According to him, the whole idea of seeking election on a party’s platform is to share binding ideas and to positively impact on people’s well being.

Oshiomohole said it was unfortunate that we were yet to have any serious political platform where the agenda was to debate policy choices.

“To me, this is what a political party should represent. It is not only meeting during elections, but meeting from time to time to discuss policy options,” he said.

He assured that if elected as APC next national chairman, he would subject everyone to the dictates of the party’s Constitution.

“We will remain faithful to the manifesto of the party on the basis of which we were elected by the Nigerian people.

“I believe that everything considered, we are still the favourite party, but we must not take the support of the people for granted.

“My task is to be able to assist government at all levels to work in a way that will reflect the core values of the APC.” he said.

The News Agency of Nigeria reports that Oshiomhole would be contesting the APC national chairmanship position at the party’s national convention slated for June 23.

“How my wife died of wrong diagnosis” – Adams Oshiomhole shares