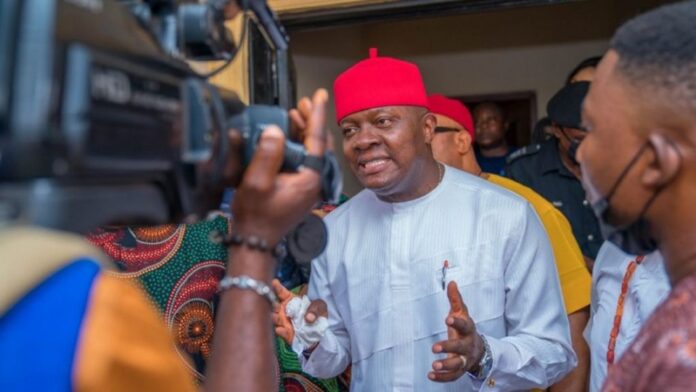 The Peoples Democratic Party (PDP) candidate in the Anambra State 2021 governorship election, Mr. Valentine Ozigbo, has expressed optimism that he still has a chance of coming off victorious in the contest, despite the number of local governments already won by his opponent of the ruling ALL Progressives Grand Alliance (APGA).

So far, Prof Charles Soludo of APGA has clinched 18 out of the 21 local government areas of the state to remain the lead candidate.

Trailing behind him is Ozigbo of the PDP, followed by Senator Andy Uba of the All Progressives Congress (APC).

Addressing journalists on the ongoing election, Ozigbo stressed that Ihiala was not the only place where elections failed to hold, saying that statistics at their disposal showed there were areas where INEC could not conduct election over the weekend.

“We have the statistics and know the areas where INEC could not conduct election on Saturday, and we call on them to ensure they do so.”

“With over 248,000 votes at stake in Ihiala and other places where election did not take place, the party still has hope of producing the next governor.

“After Ihiala, other places where elections did not take place will follow, and the Independent National Electoral Commission (INEC) must obey the Electoral Law and conduct election where it did not hold.

“The party has all areas where election did not hold and will be happy if election is held there.”

Ozigbo enjoined the people of Ihiala and other areas to come out en mass to vote for PDP as better alternative in the governance of the state.

The PDP candidate however cited vote buying as a major menace standing in the way of the nation’s political development.

Responding to question on what his next move would be, Ozigbo said the party was only more concerned with the supplementary election for now and will decide on its next line of action after the completion of the outstanding elections