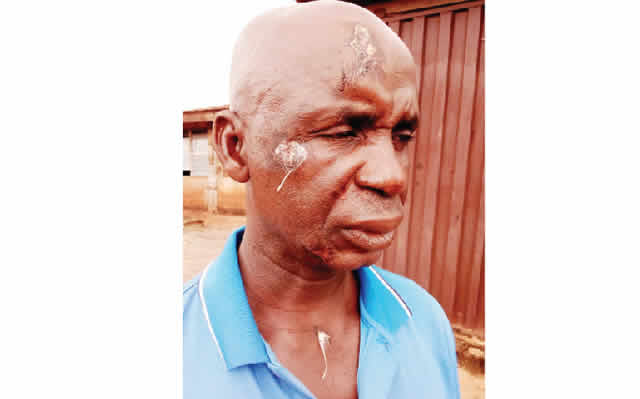 A 54-year-old driver, Mr Sunday Uzorga, currently battling with chest pain after he was allegedly brutalised by policemen at Nsukwa junction area in Delta State, narrates his ordeal and how policemen use point-of-sale machines to extort money from motorists, in this interview with MATTHEW OCHEI

Who are you and what do you do?

My name is Sunny Uzorga from Kwale, Delta. I am a driver. I work with Delta Appreciate Motors, plying the Asaba-Ughelli route.

What caused the bruises on your body?

I got the bruises on my way to Ughelli on July 28, after I was beaten by policemen at a checkpoint.

What did you do?

I did nothing. The policemen that stay around Nsukwa junction flagged down my vehicle and I stopped. They asked one of my passengers to get down from the vehicle and he did. Then they started checking the contents of the pockets of the young man.

They found two phones in his pockets and said they would not release him, but I begged them to release him. I explained to them that since I was the one who carried him from the park, there was no way I would bring him to the junction and leave him behind. One of the policemen, an inspector, shouted at me and later ordered the young man to enter their van.

The inspector threatened to shoot my tyres. I begged him not to do that.  Another police inspector asked the other inspector to leave me but he refused. Suddenly, the first inspector hit me in the chest and I fell down.

They started threatening the young man and eventually took him somewhere. They collected N20,000 from him even though he did not commit any offence.

I managed to drive to Ugheli and later went for treatment because I was badly injured but my chest still hurts.

When did the incident happen?

It was in the daytime, around 1pm.

Did you report the incident at any police station or to the management of the park?

By the time I returned to Asaba on that day, it was already late. So, the following morning, after my treatment at the Federal Medical Centre, I went to police headquarters to lodge a complaint with the help of a human rights activist, Mr Victor Ojei, though the policemen have been calling and begging me over the incident.

How were they able to reach you?

How were you able to treat yourself?

There is no money. I feel very bad. I am still in pain and my chest hurts; I can’t go to work. I don’t even have money to treat myself. The authorities are not doing their best. They should monitor the policemen at the checkpoints very well because they do a lot of wrong things there.

What do you plan to do now?

That’s why I am trying to share my story with the Commissioner of Police, Delta State, Hafiz Inuwa; Governor of Delta State, Senator Ifeanyi Okowa; and the Inspector General of Police, as well as other Nigerians, so they will know the activities of the policemen. They are like hoodlums.

Why do you describe them as hoodlums?

I am a driver, and drivers are always on the road. We know about their evil activities on the road. We know how they force passengers and private car drivers to give them money, even via POS machines. They will force you to transfer money to their accounts before leaving you and you will have no one to fight for you. They threaten us such that we won’t have any option but to do the transfer. In fact, they are robbing passengers on the road. They have their own POS machines. They do it to other motorists as well but we can’t talk because they have power. When they arrest you, they will start browsing through your phones, asking how much you have in your account. Then they threaten you and tell you to transfer money to them.

What do you want the IGP and the CP to do?

They should monitor the activities of these policemen. If you send people to work, it is your duty to monitor them to know if they are doing well. Fear will not make transporters speak out. If not because of this incident, I would not have said anything as well. Why would an old man like me be beaten like a child without committing any crime?

How many children do you have?

I have eight children. I’m still battling how to take care of them, especially in this coronavirus pandemic. The police are supposed to protect us. Why are they turning themselves to our nightmare? They should look for ways to treat me. My chest is paining me seriously.