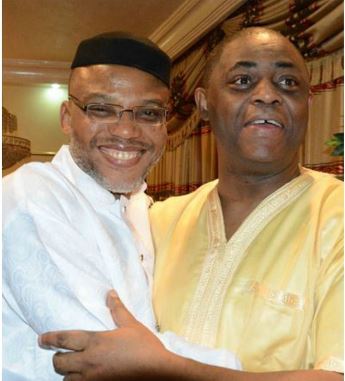 The apex Igbo group, Ohanaeze Ndigbo Worldwide, says a former Minister of Aviation, Femi Fani-Kayode, was used by the Muhammadu Buhari-led government to deceive the leader of the Indigenous People of Biafra (IPOB), Nnamdi Kanu.

In June, Kanu was arrested in Kenya and extradited to Nigeria to face treason charges.

He was subsequently arraigned and brought before Binta Nyako, a Judge of the Federal High Court in Abuja, who asked him to be remanded at the DSS custody.

Kanu is facing charges bordering on treasonable felony instituted against him at the court in response to his agitation for the Republic of Biafra.

He was granted bail in April 2017 on health grounds but skipped bail after disregarding some of the conditions given to him by the court.

The Secretary-General of Ohanaeze, Okechukwu Isiguzoro in a statement on Saturday said Fani-Kayode who recently joined the ruling All Progressives Congress (APC) had been a secret agent of the caliphate and the Presidency against the Igbo nation.

The statement read, “Femi Fani Kayode’s magniloquence and grandiosity on the unity of Nigeria contrary to his previous stance on Biafra and Oduduwa Nations shortly after he was received by President Buhari as a new APC member, had reinforced our suspicions that FFK was a pawn in the hands of Igbo detractors playing the scripts craftily designed for the engineering of sponsored violence and uprising against the people of South-East. He consistently enticed Igbo Governors and Nnamdi Kanu as a friend of Ndigbo, with fanciful and deceitful words to achieve this devilish agenda, which he had accomplished before he defected unexpectedly to APC.

“FFK only played into the hearts and confidence of his Igbo casualties, got sensitive information from the so-called Igbo elites, and passed it on to the Presidency.

“He has been a secret agent of the caliphate and the Presidency against Igbo, perhaps, he might be instrumental in the illegal abduction of Nnamdi Kanu; undoubtedly, his wizardry and satanic roles lured Nnamdi Kanu into demolishing the confidence of Nigerians against trusting Igbo with Presidency in 2023 and indirectly encouraged violence throughout the South-East states.

“We insist that it’s the constitutional rights of FFK to join any political party of his choice but he should further desist from making boastful comments on how he will lure Igbo Peoples Democratic Party Governors to the APC. First of all, he should tender unreserved apologies to Governor Umahi over the falsehoods and his makeup stories of being instrumental in the defection of three PDP Governors to APC, saying Gov Umahi was among them.”