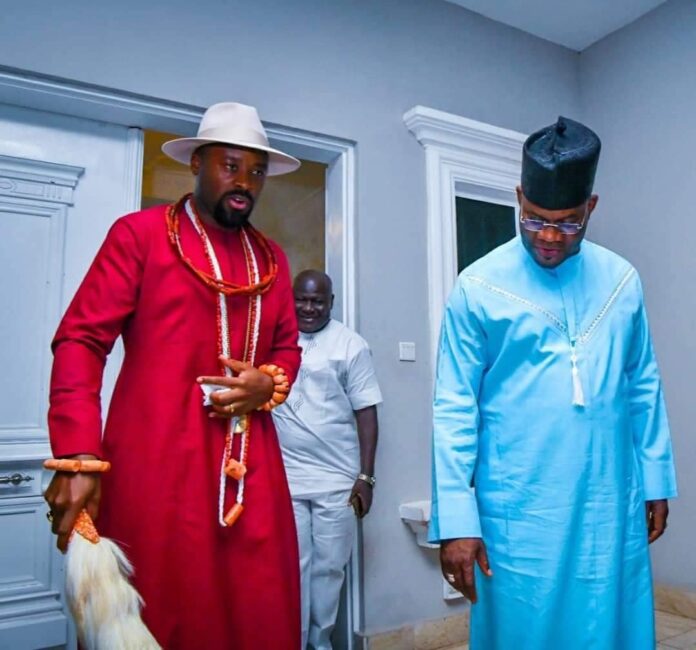 Ogiame Atuwatse III arrived the state for the official presentation of Staff of Office to HRM Alaji Mathew Opaluwa as the Atta Igala.

Bello thanked the monarch for the visit and for accepting the invitation to attend the ceremony.

Bello who also congratulated the monarch on his installation as the Olu of Warri said it was a great development for the current generation to see young people vested with such responsibilities and powers.

“When the king makers came together and choose you to ascend the throne of your ancestors, my hope, my dream, my aspiration, my desire, my wish for this country was elated.

“And I know that this generation at this time is going to be blessed. They could not have been a better selection than yourself.

“Let me use this opportunity to congratulate you, to congratulate the people of Delta state and the Kingdom at large to have a monarch of my own generation as a young person.

“When you were talking, I began to feel the blessings already because I know the words of our ancestors are coming forth.

“Every prayers of our ancestors coming through you from the heavens shall be accepted by each and everyone of us.

“I am going to work closely with you to ensure that your own reign in our own time is a blessing to our generation and nation at large,” Bello said.

Earlier, the Monarch who expressed pleasure in visiting the state for the first time stated that it was more of a homecoming to a place where the part of the origin of the Itsekiri Kingdom could be traced to.

Reigning blessings on the State, the Monarch said that the significance of the Kogi as a confluence state where the two great rivers, Benue and Niger meets will bring in more blessings and prosperity to the state.

The Olu of Warri also commended governor Yahaya Bello for the visible development projects which they saw on their journey through the state.

“It is a pleasure to be in Kogi State this evening. For many years I have driven through Kogi state and this is my first time I have come into Lokoja proper.

“It was a sort of a homecoming when the representative of the Atta Igala came to invite us for the coronation, we did not hesitate to accept their invitation.

“Yes we are here to support and celebrate with the new Atta Igala, it is interesting that we are in the Confluence State where the two great rivers, Benue and Niger meets.

“Everybody knows that I am the King of waters. And since here is where the two Rivers meet, I use my authority, my great office to declare that Kogi is a prosperous state, it is a blessed state, it is a productive state.

“And the blessings that God intends to emanate from here will grow across the nations, and we release that today.

“It is also important to note that the reason why we came, the Ishekiri people are made of five indigenous communities, four of them have their origins from the water sides of Ogun state.

“One of them however which is the one that goes to our ancestral hometown origin is Idah so we felt it was important we came to support our brothers in the other side of the Niger.

“And in many ways I want to make bold to say that thank you for your hospitality, the good work you are doing, we saw the evidence on the road when we were travelling,” the Olu of Warri said.