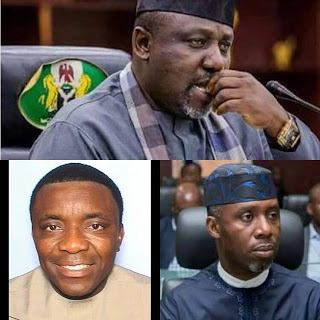 There are indications in Imo State that something swift may happen soon in the already DISMANTLED political camp of the governor, Owelle Rochas Okorocha who has seemingly lost the battle to get complete hold of the party structures in the state with his devilish desire to impose his son-in-law as governor after him.

The real gist now is that after the total rejection by NDI-IMO of his son-in-law, Uche Nwosu, Rochas Okorochas in his bid to cover his dirty secrets, has decided to endorse, “SINCE NDI-IMO WON’T HAVE UCHE NWOSU” Hon. Chike John Okafor, Member, House of Representatives, representing the people of Ehime Mbano/Ihitte Uboma/Obowo federal constituency and Chairman, House Committee on Health.

Rochas Okorocha’s choice of Chike Okafor as replacement for Uche Nwosu is not unconnected with the fact that Chike has been a part of Okorocha’s history from his days at Zenith Bank Plc, where they had deals running into billions between them and which also made Rochas reward him, Chike with a post as Commissioner for Finance in the state and later a House of Reps seat.

It is a popular believe that after Uche Nwosu who is family, the next person whom Rochas feel will cover his corruption in Imo State is Chike Okafor whose hands is deep into all the frauds committed by Rochas since he became governor.

How this will play out is yet to be seen as Ndi-Imo has rejected Rochas Okorocha and any governorship aspirant brought by him will be rejected same way they rejected Uche Nwosu.

We dey watch him and his cohorts.