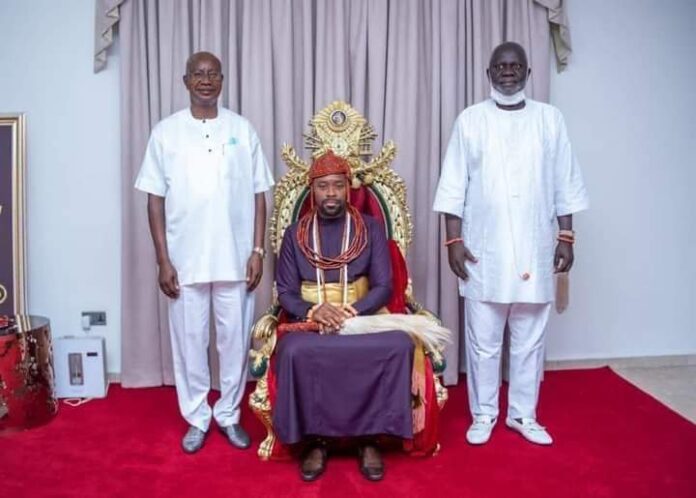 Delta State Governor, Senator Dr. Ifeanyi Okowa in order to accomplish more gloriously on his five-point agenda by building a Stronger Delta for the social, economic, political and cultural sustainability of the present and future generation of Deltans, has reassured the prevalence of good governance in all communities across the state.

The Governor, who was represented by his Special Adviser on Rural and Community Development, Rt. Hon Emmanuel Okoro, PhD disclosed this on Monday, in Warri, on the occasion of interfacing with the leadership of Itsekiri Ethnic Nationality, aimed at identifying their broad development agenda.

Governor Okowa, while mentioning some good number of already executed projects in Itsekiri Ethnic Nationality, thanked His Royal Majesty, Ogiame Atuwatse III, the Olu of Warri Kingdom and other opinion leaders of Itsekiri extraction for taking possession of development projects in their domains.

Reiterating his commitment to the actualization of a Stronger Delta, Governor Okowa stressed that the establishment of the Office of the Special Adviser on Rural and Community Development was to cater for interest of the people at the grassroots.

Harping on the importance of peace, Governor Okowa said to them, “In your various communities, you must have to promote peace. You must try as much as possible to control our children, particularly those who destroy government projects and also disturb contractors embarking on government projects’’.

Responding on behalf of the Itsekiri Ethnic Nationality, the Olu of Warri, Ogiame Atuwatse III, lauded Governor Okowa’s contribution to peace and development in Delta State and restated their unwavering support for the Okowa’s stronger Delta vision.

Pointing out some of their development agenda, the monarch named provision of Electricity, Pipe Bone Water and establishment of Courts for administration of justice, as key needs for the Itsekiri ethnic nationality.

He also appealed to the Governor, ably represented by his Special Adviser, to judiciously address the issue of pollution by the oil companies in their ethnicity, as pollution from oil spills had made life difficult for them.

The meeting which was hosted by the Ogiame Atuwatse III, the Olu of Warri, at his residence, had in attendance, the Warri Council of Chiefs, as well political appointees on Community Development who accompanied the Special Adviser.