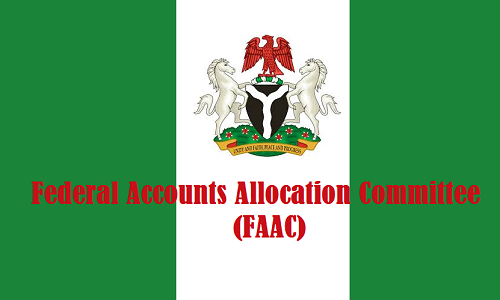 The Federation Accounts Allocation Committee (FAAC) at the end its meeting on Thursday  shared N640.310 billion to the three tiers of government as Federation Allocation for January, 2021.

From the amount, the Federal Government received N226.998 billion; the States received N177.171 billion while the Local Government councils got N131.399 billion.

The communique by the Federation Account Allocation Committee (FAAC) at the end of the meeting indicated the Gross Revenue available from the Value Added Tax (VAT) for January, 2021 was N157.351 billion as against N171.358 billion distributed in the preceding month of December, 2020, resulting in a decrease of N14.007 billion.

From VAT disbursements, the Federal Government got N21.950 billion, the States received N73.168 billion, Local Government Councils got N51.218 billion while Cost of Collection to the Federal Inland Revenue Service (FIRS) and the Nigerian Customs Service (NCS) got N11.015 billion.

The communique stated “distributed Statutory Revenue of N482.958 billion received for the month was higher than the N437.256 billion received for the previous month by N45.703 billion, from which the Federal government received N205.047 billon, States got N104.003 billion, Local Government Councils got N80.162 billion. States captured under the 13 percent derivation principles got N28.777 billion while N64.951 billion went to the FIRS and the NCS as Cost of Collection/Transfer and Refund.