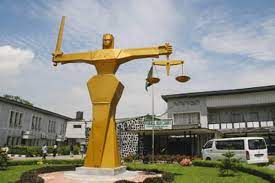 In an originating motion with Suit No: FHC/YEN/CS/53 2021, filed at the Federal High Court in Yenagoa, Bayelsa State, and sighted by the editor ACER, the Applicant, Mrs. Ginika Elizabeth Ani (Suing as representative of Onyebuchi Nnabuchi family), is seeking for the enforcement of the fundamental right to life of the deceased under Sections 33 (1) AND 46 of the 1999 Constitution of the Federal Republic of Nigeria (as amended).

ACER recalls that sometime in January, 2020, the 6th Respondent, Constable Egoli Ebiakpo had opened fire on the driver of a peace mass transit bus and the deceased simply because the driver had attempted to drive off after packing close to the bank premises.

In an affidavit deposed to in support of the Application, the deponent stated amongst others as follows:

That about 1pm on the 6th day of January 2020, my younger brother Onyebuchi Nnabuchi called me that he was coming back from Onitsha to Bayelsa with Peace Mass Transport Bus.

That surprisingly, at about 6 pm on same day, the 6th day of January, 2020 I was in my House at Okaka at about 6pm, when my phone rang behold it was ONYEBUCHI’S call, when I picked the call I discovered that it was a different person and on response to the call I was informed by the unknown person that Onyebuchi has been unlawfully shot by a police officer attached to Fidelity Bank Ekeki Yenagoa Bayelsa State.

That on receiving this information, I left my house immediately to the scene only to discovered that Onyebuchi was lying helplessly inside the Peace Mass Transit bus in a pool of blood. Immediately, I inquired from other passengers and passersby to confirm what transpired.

That I was informed by the passengers and passersby that Onyebuchi and the Driver were shot by the 6th Respondent.

That immediately, I confronted the 6th Respondent who without hesitation admitted to committing the offence and hence, I called my Husband to inform him.

That before the arrival of my Husband, I tried to talk to Onyebuchi but all to no avail that was when the passersby and a police patrol vehicle helped to call the ambulance who took the victims to Federal Medical Center but upon arrival the driver was confirmed dead.

That I was also informed by one Victor Ebuka a passenger who was in the bus at about 6:40pm and I verily believe him as follows;

a. That at about 6pm when they arrived at Ekeki in Yenagoa, the driver wanted to alight at Fidelity Bank to drop a waybill for someone who lives behind the bank.

b. That when the driver stopped the vehicle, the 6th Respondent approached the driver and demanded the driver to leave the premises of the bank.

c. That the driver informed the 6th Respondent that he would deliver a waybill package and depart immediately.

d. That the 6th Respondent demanded that the driver gave up the keys to the said vehicle but the driver refused and he immediately ignited the vehicle to drive off.

e. That at the attempt of driving off, the 6th Respondent pulled out his riffle and fired directly at the driver and the deceased, Mr. Onyebuchi Nnabuchi, at a very close range.

That the driver of the commercial bus died immediately at the hospital while Mr. Onyebuchi Nnabuchi was admitted at the same Federal Medical Centre Yenagoa, Bayelsa State where he was given pints of blood at a total cost of N100, 000(One Hundred Thousand Naira) only. the receipt issued evidencing the payment is hereby annexed and marked Exhibit ‘A’

That at the Federal Medical Centre Yenagoa, the doctor discovered that Mr. Onyebuchi Nnabuchi had very severe brain injury which resulted to various degree of surgeries. Photograph of the Applicant while the surgery was going on is hereto attached and marked as Exhibit’ B’.

That my younger brother Onyebuchi Nnabuchi undergo operations and surgeries of various degrees at the Federal Medical Centre Yenagoa from 7th of January 2020 to the 20th day of April 2020 before he eventually died. The medical report and death certificate is herein attached and marked as Exhibits C and D respectively.

a. That at the Federal Medical Centre Yenagoa when my younger brother Onyebuchi Nnabuchi was going through various degree of surgeries, the head of the medical team (Dr Nnaemeka Nwachukwu) who took care of Onyebuchi recommended drugs and other medical items which we purchased outside the hospital at the rate of N 1,500,000.00(One Million Five Hundred Thousand Naira) Only, the receipt evidencing the purchase is herein annexed and marked Exhibit ‘E’

Based on the averments deposed to by the Deponent, the Applicant on behalf of the deceased family is seeking for the following reliefs to wit: