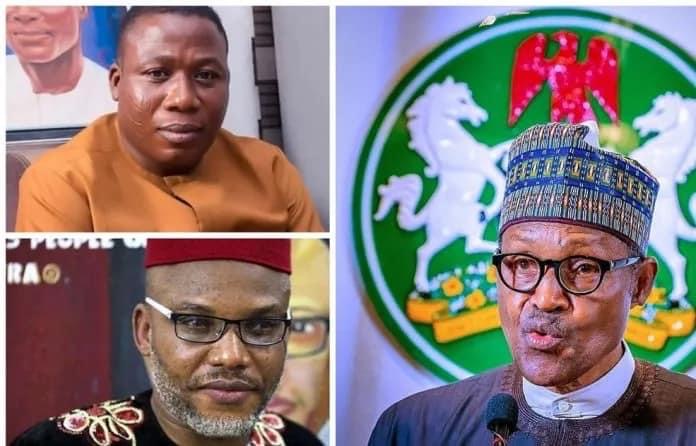 The CAGG National Coordinator said President Buhari’s decision to release Nnamdi Kanu and Sunday Igboho is majorly because of the 2023 general elections.

Speaking authoritatively, Bamgbose said that the clampdown the IPOB leader and the Yoruba Nation agitator will soon be over.

“There are strong underground moves both within and outside the country to discontinue the charges against them,” Bamgbose told reporters on Monday.

“Unknown to many Nigerians, some very close allies of President Buhari have strongly advised him to handle their cases wisely because of the 2023 General elections,” he said.

Bamgbose said that Buhari has been told by his allies that clamping down on the highly popular agitators will adversely affect the fortunes of the All Progressives Congress, APC in 2023.

“It’s obvious from the body language of the President that he will yield to their advice. Another aspect of it is that some Southern Governors are equally secretly negotiating soft ground for the embattled agitators,” he added.

“They are not making it public for obvious reasons. There is also the pressure from International Comunity to release them soon. In order words, both agitators may soon regain their freedom, hopefully before the end of the year.

“Some top politicians think that considering that 2022 will be the kickstart of the electioneering campaign for the 2023 general elections, it will be ideal to release them this year.

“However, of major concern is the continued violence in the South East. The government seems to be closely monitoring events in South East.

“There are plans to release Igboho to continue his journey to Germany and later release Nnamdi Kanu to southeast Governors and Ohaneze, but on condition that he will stay back in Nigeria.

“The plans are good but the primary thing President Buhari should do is to ensure fairness to all zones in the country. He is not to be seen as representing the interest of a clan or region.

“He was not elected by a particular section of Nigeria. There must be nothing like marginalization in any form. The votes of his clan or region could not have made him the President of Nigeria.

“In the 2011 Presidential elections, he got 12 million votes, the majority of which came from the North, but he lost to Jonathan. He won in 2015 because the South supported him. In order words, he should be more nationalistic in his approach to national issues,” he said.