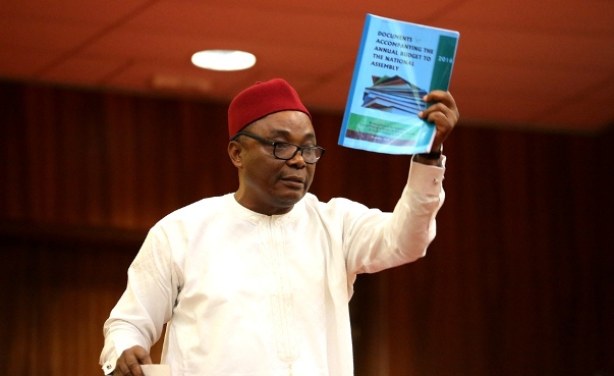 Ex-Agitators from the Nine States of the Niger Delta region have commended the decision by the Senator representing Delta North Senatorial district in Delta State, Senator Peter Nwaoboshi to dump the People’s Democratic Party (PDP) for the All Progressive Congress (APC), describing the decision as an icing on the cake for those in support of pragmatic development in the region.

According to the Ex-Agitators, under the aegis of the Niger Delta APC Youth Vanguard, the defection to APC will further allow to Senator Peter Nwaoboshi to further help in the repositioning of the Niger Delta Development Commission and promote Federal Government policies that will strengthen regional intervention agencies and socio-economic development in the Niger Delta.

The Niger Delta APC Youth Vanguard (NDAYV), the umbrella group of the ex-agitators, made this known during a call on the Igbuzor country home of Senator Peter Nwaoboshi at Aniosha Local Government area of Delta State and the presentation of credence of honour/award of excellence for service delivery, stated that the constituent of Delta North and the people of the region will not be confused by the politics of the defection but focus on the tireless efforts and sacrifices which he has made towards the advancement and development of the Niger Delta region.

According to the NDAYV, led by the convener, Gen FIAWWEI PATHFINDER and the National Secretary,Comrade AK ETTA PETERS, despite the fact that Senator Peter Nwaoboshi is known for his boldness during the bill to amend the NDDC act to reposition the commission for a greater performance and to improve service delivery to the people of Niger Delta region in other to meet the purpose of its establishment, the constituent have never had it so good with the presentation of bills for the establishment of a federal Polytechnic to be cited in Ndokwa Nation and the bill seeking for the establishment of a Federal University of Agriculture and Technology to be cited in Aboh, which is first of its kind in the history of the South-South region.

The umbrella group of the ex-agitators however warned off those opposed to the decision of Senator Peter Nwaoboshi to defect, insisting that instead of embarking on sponsored and frivolous campaign of calnumy, ,”they should hide their faces in shame as they are part of the under development of Delta State, the region and the country at Large. They are part of the political party in power in the state since 1999 yet there is no tangible meaningful Development in the state in terms of massive infrastructural development, no single industry and no single factory and no job creation and no human capital development with all the Billions and trillions that has been allocated to the state through 13 percent Derivation funds with other revenue sources yet there is no significant Development to show compared to the amount of trillions that has come to the state coffers.”

“Indeed,it is a smart move made by Senator Peter Nwaoboshi for crossing over to the All Progressive Congress is a welcome development and we can state categorically that the move was a right step in the right direction at the right time and it was a move born out of due consultation with the good people of delta north senatorial district in other to identity with Mr. President who is the commander in chief of the armed forces of the federal republic so as to synergies with the federal government at the center in other to attract more significant development to benefit the people of delta north senatorial district”.

“Nwaoboshi represent the true image needed from Delta State and the Niger Delta region. The Senator has distinguished himself high and secured solace in the presidency, it is on record that the people of delta north senatorial district have not had it so good like this before since 1999 despite other senators were there before him at the red chambers, but today with senator Peter Nwaoboshi the story is different and the people of delta north senatorial district are very much happier than ever before due to his dispose wealth of experience with his excellent performance at the National Assembly. He is known by his people as the oracle of massive road infrastructural development with human capital development and youth empowerment and numerous job creation scheme for the youths in delta north senatorial district delta state and Niger Deltans by extension”.

“And in the area of road infrastructure and other monumental projects the distinguish senator Peter Nwaoboshi the oracle of delta state politics been able to influence a lot of people oriented massive projects to the benefit and development of delta north senatorial district and including delta central and that of delta south senatorial district cut across the riverine areas in the creeks, and these projects include the rehabilitation of utagba- Uno – Isumpe road project that was abandoned and long neglected by his predecessors, the award of the Abbi- Ogume Road project, Ushie – Ashaka road project in Ndokwa east Local government area and many other numerous projects above 30 to 50 road projects were all initiated by the distinguish senator Peter Nwaoboshi.”

“Therefore, our group which is made up of ex agitators stakeholders and like minds of progressives that cut across the nine states of the Niger Delta region and have identified with the good works President Muhammadu Buhari is doing in the region and which has transformed mostly every states in the region, want to use this opportunity to call on all well-meaning Deltans, home and diaspora, to join hands together with our most respected Deputy Senate President, Senator Ovie Omo-Agege and Senator Peter Nwaoboshi to move delta state forward and turn it to industrial hub and modern technology innovation center,.”

“Our Kingdom Under Military Siege, Rescue Us” – Egbema People Cry Out To COAS, Others