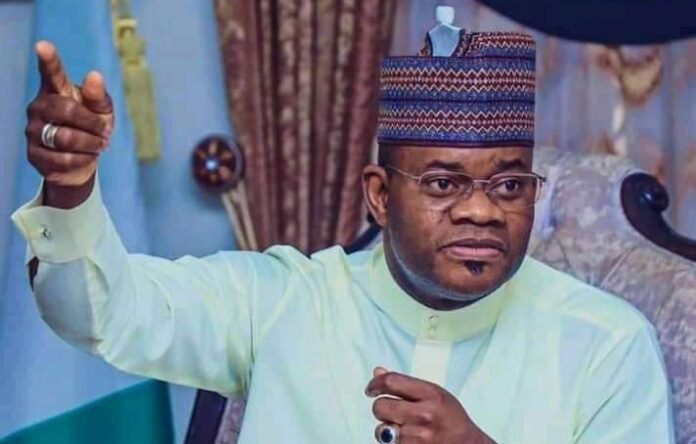 Hundreds of Youths from the Nine states of the Niger Delta region have thrown their weight behind the clamor for the Kogi State Governor, Yahaya Bello, to declare his aspiration to contest the 2023 Presidential election, declaring their readiness to mobilise and support his candidature within and outside the region.

The Youths, under the aegis of the Niger Delta APC Youth Vanguard (NDAYV), said the choice was made after due consultations regarding the pressure being mounted by eminent personalities and opinion leaders of thoughts across the six geo-political zones with their blessings and support asking Gov Yahayah Bello to go ahead with his 2023 presidential race and support him based on his contributions on issues of Nation building, peace advocacy, security stability and infrastructural and economic developmental strides in Kogi State for the past six years.

The President/National Coordinator of the group, Gen. Fiawei .E. Pathfinder and National Secretary, Comrade A.K.Peters with the leadership of the group,in a press statement conveyed in Abuja yesterday via electronic mail, argued that the choice of Governor Yahaya Bello was made after taking a closer look at the list of possible presidential aspirants with clear connect with millions of youths in the six geo-political zones and they have come to the conclusion that Gov. Yahaya Bello stands out among them all.

According to the group, though the youths under the NDAYV which are made up of members of the All Progressive Youths and Ex-agitators with stakeholders cut across the region who core believers of President Muhammadu Buhari led APC federal assured Gov. Yahaya Bello that they are behind his 2023 presidential movement and will always throw their full weight behind him at all times as our highly respected committed hard working party faithful, as a patriotic detribalized TRUE Nigerian with a clear conscience of truth.

They also pointed out that they have started a promotional campaign to spearhead massive registration into the ruling party, the APC and embarked on support programmes to assist in the INEC on going registration exercise at various communities, wards, polling units and fishing camps in the Niger Delta region,”, while we did the sensitization and mobilization of these young people, whom we have earlier made to register and collect their Permanent Voter Cards (PVCs) ahead of 2023 general elections in other to enable the APC party to retain power at the center come 2023.

“All these are geared towards strengthening our support base for the choice of youth mind aspirations come 2023. We have keenly watched and seen the great infrastructural, Peace Security Stability and economic developmental strides in Kogi State for the past six years and we are really proud of Gov Yahayah Bello because of the litany of achievements he have recorded so far. Our choice of Gov Yahaya Bello is based on his great role to stabilize the polity at National level in many fora. He has,at different times, demonstrated loyalty and commitment to Mr President and the affairs of the party with action borne out of passion to ensure our great party is united and remains unbeatable at state level and at the center as well;.

“We believe in your vision and deeds of kindness to better the lives of poor Nigerians, and we will join you in this great work based on our reputation and track record to make your presidential ambition a reality come 2023.From our assessment on your patriotism, especially, your sincerity of purpose and clarification on national issues which almost consumed the country, but you never hesitated to boldly take the bull by the horn to address and settle such critical issues. The stoppage of the strike action by the amalgamated food suppliers union by northern food producers and suppliers to southern Nigeria, which was almost divided the unity of the country and that would have led to serious bloodbath and outright civil war if not for your timely fearless intervention and wise wisdom applied to douse the tension and ugly situation would’ve led to bloodbath between the North and the South but thank God Gov Yahayah Bello sacrifice his life and put all resources together and put off the looming war that wanted to tie the country apart;

“You made youths of our party and Nigerians proud for the bold step you took to amicably settle the issue and that was historical and made you an ‘Icon of Peace’ stand tall among your peers and colleagues who are governors from the north and southern part of the country. At this juncture we want to use this medium to urge Nigerians from all works of life across the six geo-political zone. We call on all Christian faithfuls and Islamic leaders, Emirs and traditional rulers from the north and the southern part of the country to join in the support for Gov Yahaya Bello 2023 presidential movement wish is a clarion call to serve our mothers land.

“It is a divine project that will give birth to a fresh air of peaceful coexistence without any religion underturne, bias nor sentiment and without any political difference devoid of hate speech. Gov Yahayah Bello will build upon pillar of good governance of equal representation among Nigerians and see all Nigerians as one indivisible Nation with affection of showing love to one another in other to heal the wound that has befallen us as a people in the country due to politics of hatred and the winner got it all syndrome wish is the reason why Nigeria is still remain where it’s right now upon our over 20years in democracy.

2023 Presidency: Woman Can Take Over From Buhari – Emir of Keffi, Alhaji Shehu Yamusa

BIG STORY SAINT MIENPAMO - September 27, 2021 - 6:04 pm 0
Ex-Agitators from the Nine State of the Niger Delta region have assured the Delta State Governor, Dr. Ifeanyi Okowa and other indigenes of the...