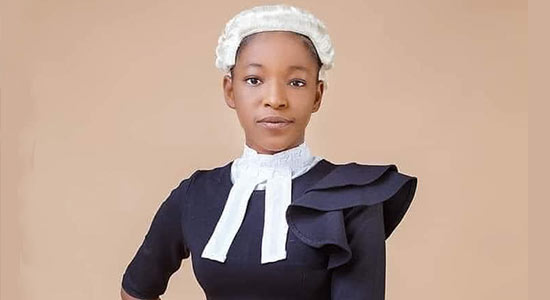 Esther Chukwuemeka, who was denied admission to study in Nigeria because of her age was amongst the new wigs that were called to the Nigerian Bar Yesterday.

Esther was denied Admission into the Nigeria University due to her young age. She was thirteen (13) years when she wrote the Senior Secondary School Certificate Examination(SSCE).

According to the story shared by her friends and family on social media; Esther Chukwuemeka was only thirteen years old at the time she wrote her Senior Secondary School Certificate Examination.

When the result was finally out, she came out successfully. She sat for Joint Admissions and Matriculations Board (JAMB) examination and was offered admission at Abia State University but she was denied her quick pursuit of the golden fleece, on the grounds that she was still underaged.

Undeterred, her dad secured her admission in the 2nd most populous country in the world, India to study her dream course, law.

She graduated in record time, came back to Nigeria, enrolled for the mandatory Nigerian Law School examination.

Today, She is being called to the bar with the appellation of a Solicitor and Advocate of the Supreme Court of Nigeria.

Esther Chukwuemeka Eqs has been described as one of the youngest lawyers in the country today by her friends.

She showed class and brilliance when the young lass shone like a thousand stars by defying all odds.

NAIJA LIVE TV gathered that she is 19 years old at the moment.