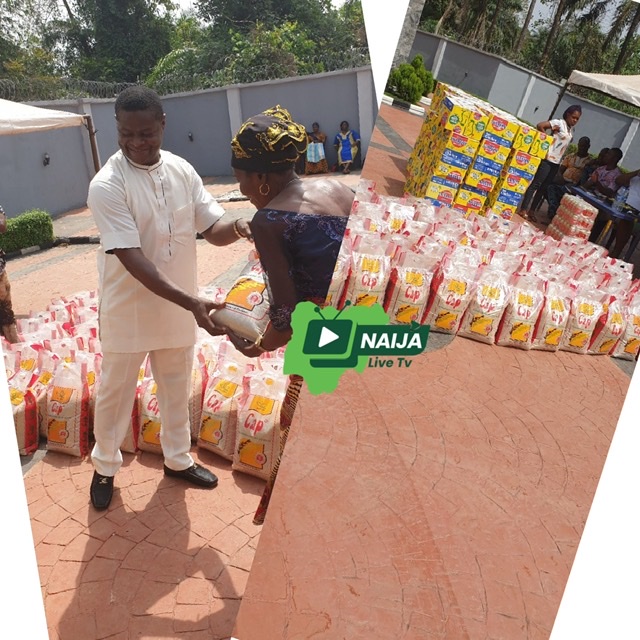 The people of Enugu Akwu Achi in Oji River Local Government area of Enugu State have commended the kindness of one of their illustrious sons, Mr. Victor Anyaegbudike expressed during the festive season.

Anyaegbudike, a staff of Chevron Nigeria Limited on Thursday, January 6, 2022, donated bags of rice and cartons of noodles to over 150 indigent widows from the four components of the community.

The Town Union President, Mr. Christian Iloma extolled the humanitarian attributes of the donor and thanked him for consistently supporting the socio-economic development of the community through the various programmes he had sponsored in the recent past.

He recalled that in December 2020, to early 2021, the donor initiated and implemented the grading of a hitherto abandoned five kilometre road from Obodo ukwu, Enugu Akwu community to the neighbouring Inyi community, both in Oji River Local Government Area.

“That the people can commute from our village to Nkwo Inyi market through that road is because of the donor, Mr. Anyaegbudike.

“That is in addition to several other activities he had supported in the town including the Obodo ukwu electricity project, the furnishing of the Enugu Akwu health centre, water project, donations to sick people, educational grants, among others,” he remarked.

He confirmed that the road project, which he helped oversee, was initiated, and funded by Anyaegbudike adding that the community is eagerly waiting for government’s intervention in terms of tarring the road and implementing erosion control on the road.

He described Anyaegbudike as an unassuming young man with undoubted passion for community development, high leadership propensity and altruism, adding that the gesture to the widows showcases his humane disposition.

He implored others to emulate the kind gestures of Anyaegbudike and contribute to societal development to leave an enduring legacy in the sands of time.

Most of the recipients of the donation thanked the donor for what they refereed to as “his large heart and golden spirit.”

They emphasised that the donation would go a long way to ameliorate the suffering of the indigent widows and their children.

According to them, Mr. Anyaegbudike has always stepped in to help the community when the need arises in different ways including in health, education, economic empowerment, and social infrastructure development.

They prayed God to continue to empower the donor so that he will do more.

Mr. Anyaegbudike stated that the gesture was to assist the widows in his little way and wish them a blissful new year.

He affirmed his passion for sustainable development in his community and beyond stating that he always wishes for a society where individuals and organizations could partner with relevant bodies to sponsor community development.

He emphasized that his passion emanated from his company Chevron, whose vision is to be the global energy company most admired for its people, partnership, and performance.

He says, “Like organization, Like employees,” the company, which has a “Tradition of Care” for communities in which they operate around the world, teaches its workers to give back to the society in any way they can.

He thanked God for enabling him to put smiles on peoples’ faces and promised to do more within available resources and opportunities.

Our family’ll soon be more than a community – Son of late Enugu man with 68 wives, 400 children, grandchildren

Popular native doctor, known as “King of Satan” who had over 300 children from 59 wives is dead