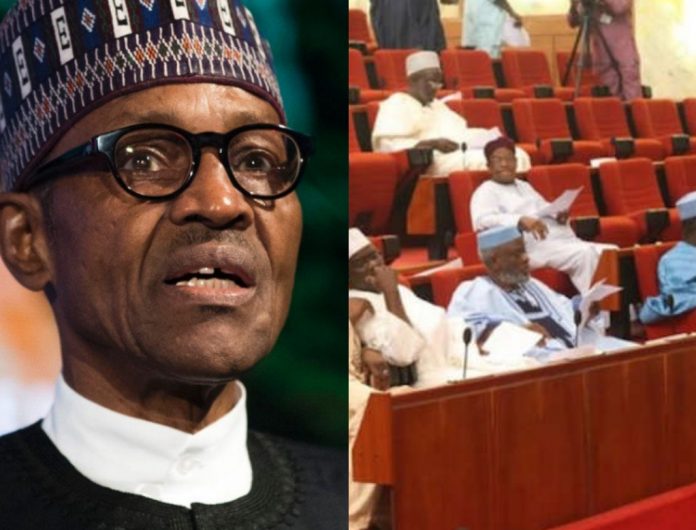 A large number of senators have vowed to override the veto of the President, Major General Muhammadu Buhari (retd.), on the Electoral Act amendment bill.

This is just as  Senate President, Ahmad Lawan, had begun making moves to prevent the embarrassment of the President.

But the Nigeria Governors’ Forum supported Buhari for not assenting to the bill, saying his reasons were cogent.

The President had withheld assent to the bill in a letter which was sent to both chambers of the National Assembly.

After Lawan read the letter, the Senator representing Rivers East, George Sekibo, raised a point of order asking the chamber to go behind closed doors to discuss the issue. The Senate President sustained Sekibo’s point of order and the closed session commenced, lasting for 37 minutes.

Sekibo, who is a member of the opposition Peoples Democratic Party, later told journalists in an interview that the Senate adjourned plenary to enable members to override the President.

He said, “By law, we have the power to override him. That’s what Section 58 (4 & 5) said. We will use our powers to do it. And they are saying that people must be present at voting. Our rule gives us three methods of voting: voice vote, by signing the document (signature) and electronic voting. So, we can use anyone.  We collected signatures in the chamber and it cuts across party lines.”

The senator later confirmed to Channels Television that they had compiled 73 signatures to veto the President.

Impeccable sources told The PUNCH that many of the senators irrespective of party affiliations, vowed to override the President’s veto in line with Section 58(5) of the constitution.

A senator, who is a member of the All Progressives Congress, however, said Lawan was not inclined towards overriding the President’s veto and asked them to reconvene on Wednesday.

“Almost everyone who spoke disagreed with the President. However, the Senate President tried to calm nerves and asked that we reconvene on Wednesday. At the moment, he is the only one that seems to be okay with what Buhari did and is reaching out. We want to see how he will stop us tomorrow. This is beyond him because we are fighting a battle of life and death” the senator who wished to remain anonymous said.

When contacted, however, Lawan’s Spokesman, Ola Awoniyi, said, “I have no briefing on that subject, so I cannot make any comment on it.”

We must extricate ourselves from public disrespect by overriding President –Senator

Speaking on the President’s rejection of the bill, Senator Matthew Urhoghide, (PDP/Edo-South), said the National Assembly would extricate itself from public odium and disrespect by going ahead to override Buhari on Wednesday.

He said history stared the National Assembly in the face if indeed it is not a rubber stamp.

Urhoghide said, “We must be reminded that members of the National Assembly are truly the representatives of the people because every federal constituency and senatorial district seat is allocated to a segment of the Nigerian people who are their constituents.

“The members of the National Assembly consulted with a cross-section of their constituents to reach an informed position on any matter of national interest and development. The issue of direct primaries in our electoral process has been well canvassed, elucidated and argued by both chambers of the NASS, and inputs were taken at public hearing from across the spectrum of all critical stakeholders.”

On his part, Senator Abba Moro, who is a former Minister of Interior, said the Senate would override the President

He said, “The reasons given by the President to withhold assent, to my view and the views of the majority of senators, are not enough. This is because all stakeholders have acknowledged the fact that the amended Electoral Act as it is today contains fantastic provisions that could deepen democracy.

In an interview with The PUNCH, the Spokesperson for the Senate, Senator Ajibola Basiru, said the red chamber would follow legal processes to address the President’s action at plenary on Wednesday.

Basiru said he could not predict exactly what the senators would do.

He said, “There are legal processes to follow when the President declines assent to a bill and there are options available to the National Assembly. It is either we agree with the President’s observations and delete those areas he objected to and return the corrected bill back to him.

“Secondly, if the majority of the two chambers, that is the two-thirds, feel that the President’s reasons were not cogent, then they could override him. They could also decide to abandon the bill just like they did in 2015.

In an interview on Channels Television’s ‘Politics Today’ programme, however, the Senate’s spokesman said some of the President’s reasons for withholding assent were fallacious.

Senator Basiru said the President declining the bill because of security concerns was like refusing to hold elections because of insecurity.

The lawmaker further argued that the President’s claim that the direct primaries would have huge financial implications was wrong.

He said, “We would consider those rational (reasons) adduced, counter-arguments that may be canvassed against whatever reasons the President has given. For instance, the argument on the cost that has been raised by Mr President with respect is presumptuous and totally fallacious.

“There is nothing that says the primary election must be conducted on a ward basis, it could be conducted either on a quarterly basis or local government basis. As regards the argument on smaller political parties, they may decide to organise their own at the state level. On the issue of security an extension of that argument would be that because we have security challenges then we should not even hold the 2023 election.”

Meanwhile, at the House of Representatives, the Speaker, Femi Gbajabiamila, addressed the House, noting that action on the bill would be suspended till when the National Assembly resumes from the Christmas and New Year break.

The House adjourned plenary till January 18, 2022, while the Speaker barred committees from sitting until resumption.

The Speaker said the House would act on Buhari’s communication when the National Assembly resumes in January.

He said, “By the time we resume next year, we will be closer to the end of our tenure, with national elections rapidly approaching. In the past, election years have witnessed a decline in governance activities as political pursuits cloud the calendar. That will not be the case this time around.”

But some governors have hailed the President’s decision to reject the bill.

Benue State Governor, Samuel Ortom, while speaking with journalists in Makurdi, said there was a need for the National Assembly to reconsider the clause of direct primaries.

Ortom, however, said the electronic transmission of results would deepen democracy and add value to the electoral system.

He said, “I have been privileged to be a member of various political parties and I know that primaries should be the responsibility of the political parties. Consensus is even better because it solves the problem of acrimony and unnecessary expenditures.

“This also gives opportunity to smaller political parties to participate in the process. Just as the Presidency has done this with the Electoral Act, I call on him to do the same on the economy and insecurity in the nation. He should listen to the views of Nigerians and come out with the architecture in revamping the economy and security of the country.”

Also speaking with State House correspondents after a meeting with the President, Ekiti State Governor, Kayode Fayemi, said the President did well by withholding assent to the bill.

Fayemi, who is also the Chairman of the Nigerian Governors’ Forum, said just as Buhari argued, it would be undemocratic to foist the direct mode of primaries on all political parties.

The governor, however, maintained that no governor in Nigeria was scared of direct primaries

Fayemi debunked notions that the president had danced to the tune of the governors by withholding assent to the bill.

The Ekiti governor said, “I don’t know what you mean by governors being happy. At least as the governor who has gone through a series of elections, my election into office during my first term was via a direct primary that took place in all the 177 wards in my state. And my election to my second term in office was via an indirect primary.

“Mr. President has not objected to direct primaries neither has he endorsed indirect primaries. He has only said, be fair to all, let all options apply and what you decide should be determined by your own local and peculiar circumstances. Being mindful of questions of security, finances, and internal democracy.

“So, I think we all should commend the courage of Mr. President to stand with the people. And the President, you know, just like me, is not afraid of whatever mode you decide to use.”

He also argued that the notion that direct primaries would solve electoral problems was fallacious.

“We shouldn’t really dwell too much on…there’s been this exaggerated expectation that direct primaries are going to provide all answers to whatever electoral challenges that we have faced.

Fayemi said as the Chairman of the NGF, he came to the villa to brief the President on issues concerning the states and as well commend him for trying to stem insecurity in the country.

A Senior Advocate of Nigeria, Mr Femi Falana said the refusal of the President to approve the Electoral Amendment Bill would make it difficult for  Independent National Electoral Commission to conduct credible elections in 2023 and thereafter.

A statement signed by Falana said the reason given for the rejection of the Electoral Amendment Bill was grossly misleading.

He, however, advised the National Assembly to invoke the provision of section 58 (5) of the Constitution to pass the Bill into law by the resolution of two thirds majority of the members.

“The challenge before the National Assembly is to invoke the provision of section 58 (5) of the Constitution to pass the Bill into law by the resolution of two thirds majority of the members. Having rejected to assent to the Electoral Amendment Bill in 2018 and 2021, Buhari has confirmed beyond any shadow of doubt that his administration will not allow the Independent National Electoral Commission to conduct credible elections in 2023 and thereafter. That is going to be the tragic legacy of the President and the ruling party that were campaigning for electoral reforms before the 2015general elections.

“With respect, direct primary is inconsonance with section 223 of the Constitution which has imposed a duty on political parties to elect their officers through democratic elections. There is no provision in the Constitution for imposition of candidates by moneybags through indirect primaries.

“The INEC has submitted a bill of N305bn for the entire 2023 general elections. So who conjured the figure of N500 billion for the primaries to give the impression that it is an expensive venture? In any case, since electronic voting had been adopted by the National Assembly it was going to be used for both primary and general elections. So the cost would have been significantly reduced. The fear of insecurity is a red herring in that political parties have continued to hold huge rallies even in defiance of COVID-19 restrictions imposed by the Federal Government.”

Why Buhari will not sign proposed electoral law – Malami