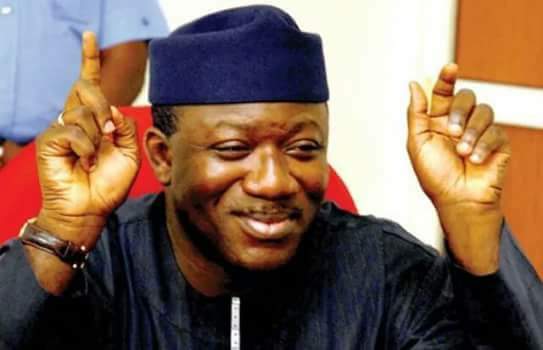 The former governor of Ekiti State and one of the just concluded All Progressive Congress, APC governorship aspirants in Ekiti State, Engr Segun Oni has blasted the Fayemi Campaign Team led by Wole Olujobi over the false accusation of Chief Segun Oni and other contestants in the campaign for the July 14 governorship election.

This is full Text:

We have read the rebuttal of Mr Wole Olujobi/JKFCO to our plea for unity and inclusiveness of Chief Segun Oni and other contestants in the campaign for the July 14 governorship election. We were not quick at replying because we never wanted to at all, but because of the continued but unwarranted attacks on the Segun Oni Team, which was what our original release meant to stop and to unite and tie us together like a bunch of brooms which is the symbol of our great party, we have to make ourselves very clear on some new points raised by the rejoinder of Mr Wole Olujobi on behalf of the Campaign Organisation of JKF.

We wonder if Mr. Wole Olujobi really knows or cares about the enormity of the danger his words and actions and those of people like him as supporters of Dr. Kayode Fayemi have started creating for our party?

People are gradually leaving APC for PDP because Eleka and Fayose are reaching out to them but our own candidate despite our crying out feels too big to do the needful and reach out to all contestants and their supporters who are willing to work for him, which is a necessary corollary to any primary election.

If we had 33 aspirants for a primary election, it automatically follows that the party had been fragmented into 33 parts before the primary. It, therefore, needs the humility and dexterity of a deal maker and the skills of a crisis manager to bring the fragmented or divided house together.

I am sure that Mr Wole Olujobi is old and knowledgeable enough to know that if we have a million broom stick in our bunch of broom and each broom stick is pulling out without care and attention, before we know it and in the presence of our very eyes the entire bunch will be gone and of no use.

Some people are today leaving the APC because they feel their interests cannot be protected by the APC candidate because of his style and disposition towards this coming election.

Some who are not moving out of the party are even saying they may “sitdown look” and stay aloof for another four years.

We know of 2 local governments in the state, where the APC members are threatening to move out en masse for the same reason.

This is our concern and the reason we are crying out loud now, yet, nothing is been done except calling us names and showing no concern for the formidable opposition ahead of us in the July 14 election, which is already in the corner.

*If Dr. Kayode Fayemi thinks, he can win the governorship election the way he won the primary election, we wish him luck. But as a party, APC should not be deceiving itself.*

The July 14 governorship election, which is about 5 weeks away will not be such a Tea Party with Governor Ayodele Fayose, a second term governor and De Facto candidate of PDP who has been campaigning now for more than one year.

For those who care to know, Fayose controls all the 16 local governments with the second set of elected officials. When Fayose was involved in voter registration drive in every local government in Ekiti, our Minister was staying in his Ivory Tower in Abuja.

We are clamouring for reconciliation and inclusiveness with the Segun Oni Team and other contestants. We know the weight of the goodwill of Chief Segun Oni among the people of Ekiti State and we also know that the July 14 election will be decided by these people and not by just 941 delegates who voted for Fayemi during the primary and who is just a fraction of the Civil Servants or Teachers, not to talk of other aggrieved sectors in the State.

But this same Segun Oni and his Team, around whom such powerful goodwill of electability by Ekiti Electorate is woven, is gradually been ostracized out of the APC in the state. Our fear and concern is that the above potent a gloomy prognostication for a successful governorship election.

Do we want to ask how it sounds in Wole Olujobi’s ears that the noninclusion of the Ekiti State APC Chairman’s name on the Presidential Dinner’s list was the mistake of the National Chairman of the party? So it was Chief Oyegun who remembered the name of Secretary Paul Omotoso and those of others who were not even members of the State Exco of the party and invited them? We are no fools here my brother.

In his reaction, Wole Olujobi/JKFCO has very unfortunately and loudly identified and called Segun Oni Team an enemy within for drawing attention to the lapses in the current style of organizing the APC campaign in Ekiti State.

It is even ridiculous or at least laughable hearing Olujobi saying that Dr. Kayode Fayemi could have rejected the names of Senators who were nominated to serve in a yet to function Campaign Committee because of a jaundiced belief that they were conniving with Governor Ayodele Fayose to file cases against him. …. ‘o mase o.’

So you people are thinking you are doing the Senators a special favour for asking them to spare their precious time to work on the Fayemi election committee?

No wonder the information making the round that our Oga patapata of APC in Ekiti State were harassing and lambasting the Senators for not reading his body language towards the primary election.

But has the same Oga forgotten that he had earlier in a public meeting in his house announced his neutrality towards the same primary?

The public should know that this type of lies are what Fayemi group deployed to bias and becloud the minds of innocent delegates against Segun Oni during the primary election. It’s not surprising this kind of campaign continues after the primary because they had always seen Oni as an alien within the same party.
So, the claim by Wole Olujobi that Segun Oni was planning to go to court through a third party or a known enemy of our party like Fayose remains figments of their imagination and nothing but a further too cheap blackmail of no foundation.

It should be noted that the campaign about the use of Federal might, has been going round everywhere in Ekiti at various APC gatherings by supporters of Dr Kayode Fayemi and boasting about it to curry the favour of the delegates. That was probably where Fayose picked it up. It is for Fayemi himself to warn his supporters to desist from such image boosting but dangerous campaigns, which are still going on now.

It is rather unfortunate that instead of correcting the errors highlighted by our release, in the best interest of our party and Ekiti State, the rejoinder from the John Kayode Fayemi Campaign Organization (JKFCO) only confirmed the fears earlier expressed by us in that release. It confirms the alleged pride and overconfidence of Dr Kayode Fayemi which the release was talking about.

As far as JKFCO is concerned, it is very appropriate for Dr Fayemi not to talk to Chief Segun Oni, Senator Ojudu, Hon Bimbo Daramola (his former DG), Mr Kayode Ojo (who came third) and other contestants even on the telephone for more than 2 weeks after the primary, in the interest of working for his own victory, apart from his 5-10 minutes visit to the aspirants on the second day of the election?

When Chief Segun Oni, in a press conference and radio/television interview expressed disappointments in the way Fayemi people were attacking and harassing his supporters according to reports he got from all local governments, one was expecting Fayemi to react to such statements from Segun Oni by at least calling to assure him that such ugly and overzealous acts would stop. This he did not do but kept quiet as if such silence gives approval to the action of his supporters and a go-ahead order to continue with the barbaric act.

It is also of interest to hear Wole Olujobi saying that as far as JKFCO is concerned, only Chief Segun Oni is credible and with high integrity but that his supporters are not. This is a big error of imagination and a stupid thing to say by Olujobi to senior citizens of the party in the name of politics all because he has the support of his Master.

Segun Oni by his own humility and leadership style rates his team members even more than himself. For him, no tree can make a forest. It is therefore clear that if Fayemi is treating credible Segun Oni this way, his supporters can now understand why they are being treated so shabbily now and what is awaiting them when Fayemi gets back to power.

We are more surprised that JKFCO which should be wooing and pleading with people to support the candidate of the party, is the one harassing, combating, distrusting and declaring those willing to assist in the work as the enemy within.

But we want to make it abundantly clear to all who cares, that APC belongs to all of us, we, like other credible leaders, spent our own money, time, goodwill and other resources to build and sustain the party in our various constituencies.

As far as Segun Oni Team is concerned, our concern and commitment are to see the success of the party especially at the Ekiti July 14 governorship election and other forthcoming elections across the country.

However, whoever plans to destroy this party and establish Fayose as the Lord of Ekiti will regret their actions. We have spoken our mind and no more reaction from us after this.