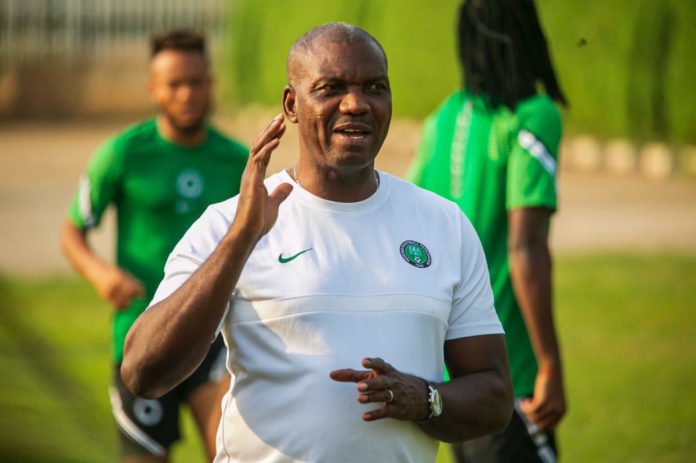 Austin Eguavoen has stepped down from his role as the technical adviser of the Super Eagles.

The gaffer’s resignation comes a few days after Nigeria failed to qualify for the 2022 World Cup in Qatar.

According to a statement released by the Nigerian Football Federation (NFF) on Thursday, Eguavoen has vacated the position “with immediate effect.”

It also confirmed the withdrawal of the “two-and-half years contract offered the coaches” and the termination of “the appointment of the entire technical crew of the team with immediate effect.”

“Following the failure of the Super Eagles of Nigeria to qualify for the 2022 FIFA World Cup, the erstwhile Technical Adviser, Augustine Eguavoen, has stepped down from that position with immediate effect,” the statement read.

“The NFF has, in the meantime, withdrawn the two-and-half years’ contract offered the coaches and terminated the appointment of the entire technical crew of the team with immediate effect. A new crew will be announced after a proper review to lead the new charge of reinvigorating the Super Eagles to face future challenges appropriately.

“’We thank the coaches and team officials for their service to the nation and wish them success in their future endeavours,’ said NFF General Secretary, Dr Mohammed Sanusi.”

The disengagement of the technical crew came just a little over one month after it was constituted as NFF dumped Jose Peseiro, Portuguese tactician, for Eguavoen following his exploits at the African Cup of Nations (AFCON) in Cameroon.

PHOTO: Eagles Enjoying Lagos Waterways On Their Way Back From Benin Republic