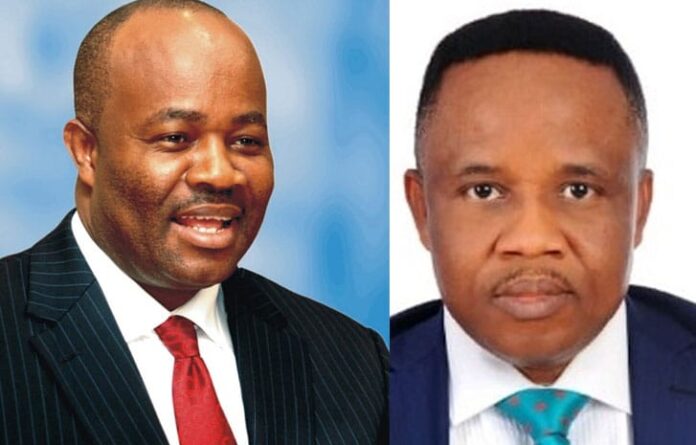 The Interim Administrator of the Niger Delta Development Commission (NDDC), Mr Effiong Okon Akwa has for the past months been revolutionizing the affairs of the Commission energetically by liaising with stakeholders across the Niger Delta region for peace, development and accountability.

Since, it was established in the year 2000, the NDDC has been faced with a poser on whether it can ever be well managed as envisioned by the stakeholders of the region as an interventionist agencies to bring about the desired peace and development through accountable and equitable allocation of resources for infrastructural development and empowerment.

This poser, has over the years, been a clog in the affairs of the NDDC with the past two years serving as a deepest low in terms of controversies, deep face corruption and demining claims of fraud.

But for the appointment of the Akwa Ibom state born Mr Effiong Okon Akwa on the advice of the Minister of Niger Delta Affairs, Senator Godswill Akpabio, President Muhammadu Buhari showed his passion to end the pathetic stories of the Niger Delta region and reposition the commission for proper development through accountable management.

Effiong Okon Akwa, who is an astute lawyer and until the appointment was the Commission’s Acting Executive Director, Finance and Administration, showed that he was born with an innate tendencies of taking risks, identifying and acting on opportunities, building bridges among stakeholders, itemizing targets amidst peaceful disposition and fulfillment of goals.

Akwa is successfully navigating the affairs of the NDDC amidst the brouhaha created by the frenzied calls for the quick completion of the Forensic audit ordered by President Muhammadu Buhari and the calls for a substantive board for the commission.

Fortunately, Mr. Effiong Okon Akwa has served as the needed link between President Muhammadu Buhari, the successful completion of the forensic audit ordered in October 2019 following persistent allegations of financial misappropriation within the development agency and the expected transition into a substantive board for the commission. His attributes as a Fellow of the Institute of Chartered Accountants and a Solicitor of the Supreme Court of Nigeria has however led to phenomenal growth and expansion to the affairs of the 21 years old commission.

Within three weeks of assuming office, Effiong Akwa engaged with members of the National Assembly to get approval, finally, for NDDC Budget 2020 which will run till June.

To the key stakeholders, despite their calls for a substantive board and end to ordered forensic audit, the Mr. Effiong Akwa led administration and the competent supervisory role of Minister Godswill Akpabio have done well to keep the commission focused on repositioning and development. The commission under Effion Akwa has remain focused and refused to be dragged into the politics of the job.

In the last Nine months, the NDDC focus under the Mr. Effiong Akwa’s watch has been to facilitate the completion of the forensic audit, because he knows that all eyes are on him. All the paid agents within and outside the NDDC will monitor everything he does or says, looking for loopholes and omissions with which to nail him when the opportunity arises. He was firm but sensible.

Since the appointment of Mr. Efiong as the Interim Administrator of the NDDC, Mr. Efiong Akwa has been able to reach out to key stakeholders from the region in decision making and Crisis management in the region. Without a doubt, youth leaders, traditional rulers, civil society organisations from the Niger Delta region have come to understand the vision of President Muhammadu Buhari for the region through the commission’s constant and constructive engagement with stakeholders in the region.

The successes achieved by the Effiong Akwa led NDDC was corroborated by the Chairman, Abia State Traditional Rulers Council, Eze Joseph Owabeke and The National President of Host Communities Organisation in Nigeria (HOSTCOM), Dr. Benjamin Tamiararebi. They commended the NDDC for organizing the stakeholders’ engagement.

Corroborating the development, the Chairman, House of Representatives Committee on NDDC, Olubunmi Tunji-Ojo, said that the cordial relationship between the NDDC and the House made the success so far recorded in the process of amending the NDDC Act.

He commended the Hon. Minister of Niger Delta Affairs, H.E. Senator Godswill Obot Akpabio and the interim administrator of the agency, Mr. Efiong Okon Akwa for the progress the commission has recorded so far, describing Mr. Efiong Akwa as the best choice this government had made. His words,“I am very proud of you and the National Assembly is proud of what you are doing. We give you all the support you need.”

The Chairman, Senate Committee on NDDC, Senator Peter Nwaoboshi, said that there was a stronger need for stakeholders to close ranks to move the zone forward. He commended the NDDC’s interim administration for realizing the need for cooperation between the National Assembly, and the commission.
These are clear endorsement of the administrative capability of an Interim Administration that is changing the narrative and repositioning the commission for a visionary intervention within the Niger Delta region.

For many stakeholders in the region, the NDDC is born again! Contrary to its distasteful past ways, the core of our new personnel is in continuous consultation and collaboration with stakeholders to co-create commonalities for the effective development of the Niger Delta. The Born again status was witnessed with the commissioning of the NDDC Headquarters after more than 16 years of abandonment.

President Muhammadu Buhari commissioned the headquarters building of Niger Delta Development Commission (NDDC), 25 years after the groundbreaking ceremony, commending the Minister of Niger Delta Affairs, Godswill Akpabio, for steadfastness in ending many years of renting by the commission.

With most of the affected projects in the region, initiated years ago and with contractors abandoning work only to show up each time a new CEO of the NDDC barked orders.

In what seems like an established trend, therefore, Akwa, the sole administrator, ordered all contractors handling the commission’s projects to return to sites and complete the work for which they were engaged. Akwa, with his administrative skills, directed the contractors to report to the commission’s headquarters in Port Harcourt, for a comprehensive evaluation of the constraints, which would assist in putting together the necessary things to ensure the realization of various abandoned projects.