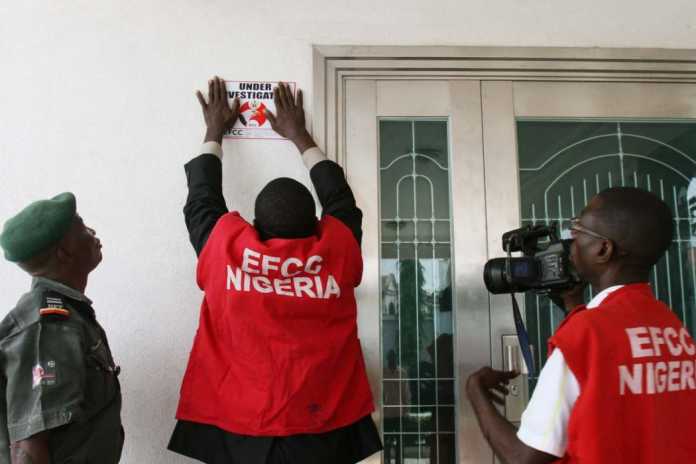 Ibrahim Magu, the acting chairman of the Economic and Financial Crimes Commission, EFCC, on Wednesday, September 25, 2019, disclosed that the agency has recovered over N100 million for the Kwara State Government from corrupt officials in the state.

Magu, who spoke through Isyaku Sharu, the zonal head of EFCC office in Ilorin, made the declaration during a visit to the office of the News Agency of Nigeria in the Kwara Sate capital.

“We started our full operations in Ilorin Zonal Office sometimes in February 2019. Our operations cut across all areas. We have recovered over N100 million cash belonging to the Kwara State Government. This money was stolen by politicians and prominent individuals within the state.

“The Commission is not afraid of anybody. Just last week, a traditional ruler returned N5 million, part of the monies he benefited from the previous administration in the state,” he stated.

He added: “When we started our operations in February, which was the eve of the 2019 general elections, we started tracking vote buying, which borders on economic crime. Today, the Ilorin Zonal Office of the Commission has secured no fewer than 26 convictions while about 15 cases are still pending in court.”

In a related development, Justice Sikiru Oyinloye of Kwara State High Court, sitting in Ilorin, has ordered the final forfeiture of a hotel and cars belonging to a Kwara civil servant to the Federal Government.

Also forfeited to the Federal Government are a three bedroom flat, two wings of two bedroom flats and a room and parlour self-contain.

Giving his judgment on Tuesday September 24, 2019, Justice Oyinloye said thatEFCC proved its case against the defendant beyond reasonable doubt, noting that the evidences presented before the court were strong and reliable.

“The interim order of this honourable court was published in The Nation newspaper, while the court’s processes were served alongside with the hearing notice to the defendant, but despite this, the defendant did not show up to explain why the said properties should not be forfeited to the federal government,” Justice Oyinloye said.

He further observed: “The evidence of the Economic and Financial Crimes Commission was not controverted or challenged by the defendant or any interested parties to the suit. This honourable court is of the opinion that the defendant was fully informed about the proceedings. In view of the forgoing, this honourable court hereby order that the said properties be forfeited to the Federal Government of Nigeria.”

Nnemeka Omewa, the prosecuting counsel, in moving the motion dated September 8, 2019, urged Justice Oyinloye to grant the prayers of EFCC, which in part was for an order of the court for the forfeiting to the Federal Government an unregistered Toyota Camry 2008 model, “found, traced and recovered by the Commission from the respondent which property is reasonably suspected to have been acquired with proceeds of unlawful activity.”

And an order of the court for the forfeiting to the Federal Government a gold-coloured Porsche Cayanne vehicle, “found traced and recovered by the Commission from the respondent which property is reasonably suspected to have been acquired with proceeds of unlawful activity.”

Justice Oyinloye relying on the motion and 13 exhibits, attached equally ordered the cars recovered from the respondent, Abdul Ibrahim, to be forfeited to the Federal Government.

The African/Nigerian Child Matching to the gate of true...