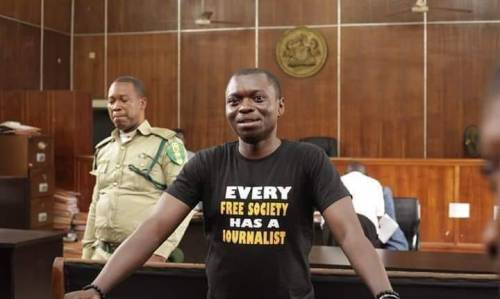 The ECOWAS Community Court of Justice will on Friday 9th July 2021 deliver judgement in a suit brought by a Non-Governmental Organisation (NGO) against the Federal Republic of Nigeria and the country’s Cross River State, challenging the “unlawful” arrest and prosecution of a Nigerian journalist and publisher, Agba Jalingo under the Cybercrime, Terrorism and Criminal Code Acts.

A panel of three Judges of Court led by Hon. Justice Edward Amoako Asante will deliver judgment in the suit which was brought by the Incorporated Trustees of the Socio-Economic Rights and Accountability Project (SERAP).

During the hearing, Mr Jalingo who was led in evidence by counsel representing SERAP, Mr. Kolawale Oluwadare recounted how security officials broke into his house and arrested him after he wrote an editorial article in which he alleged that a 500-million-naira expenditure by the State for the establishment of a microfinance bank was diverted.

He further told the Court that he was taken by the security personnel on a 26-hour journey during which he was not allowed to dismount from the vehicle and on arrival detained at a detention facility run by the anti-cult and anti-kidnapping police for 34 days before his arraignment on 31st August 2019.

In suit no: ECW/CCJ/APP/10/20 SERAP, is suing the Defendant for the use of Cybercrime (Prohibition, Prevention, etc) Act 2015, Terrorism (Prevention Amendment), 2013 and the Criminal Code Act to unlawfully charge Mr Jalingo before the Federal High Court in the Calabar Judicial Division of Cross River State.

The Applicant averred that Mr Jalingo, publisher of the online Cross River Watch who also reports for another online newspaper, Sahara Reporters was charged with treason for allegedly inciting the people to protest for a change of government, through the publication in his Cross River Watch, an offence punishable under section 41 of the Criminal Code Act, Cap C39, LFN, 2004.

He was also charged for allegedly causing alarm, hatred and disturbance of public peace through his publication contrary to section 59 of the Criminal Code.

Under counts 3 and 4, Mr. Jalingo was charged for allegedly conspiring with the journalist and human rights activist, Mr. Omoyele Sowore to cause terrorism and for allegedly meeting with cultists to instigate violence and acts of terrorism against the Cross River State Governor, Mr. Ben Ayade, offences punishable with life imprisonment under sections 17 & 1 (2)(a) & (b) of the Terrorism (Prevention Amendment) Act, 2013.

Mr. Jalingo who is on bail after 179 days in detention, was also charged with terrorism, an offence that attracts life imprisonment and the death penalty.

The Plaintiff contends that the Defendants and their agents have consistently and frequently used the provisions of the Terrorism (Prevention and Amendment) Act, Cybercrime Act and other repressive laws to harass, intimidate, arbitrarily arrest and detain and unfairly prosecute journalists, users of social media and activists and other Nigerians who express views perceived to be critical of government at the Federal and State levels.

On Friday, 4th October, 2019 a national court in the State had dismissed the bail application of Mr. Jalingo after the judge Honourable Justice Simon Amobeda held that the offences for which he was charged were not bailable as one of the counts carried death sentence.

The Plaintiff argued that these harassments, intimidation, arbitrary arrest, detention, torture, unfair prosecution and imprisonment of Mr. Jalingo and other journalists who were exercising their rights to freedom of expression and information and media freedom violate all the international and regional treaties on human rights to which Nigeria is a State Party.

The Plaintiff further argued that criticizing the actions of government, government officials and expressing one’s opinion on issues of national, political, social or economic interest is the bedrock of a vibrant and transparent democracy and that persons in government such as the Defendant and its agents must exercise high tolerance to criticism.

Among the reliefs sought were:

An order directing the Defendants to immediately drop all charges against Mr. Jalingo his unconditional release from prison as well as an order directing the Defendants and/or their agents in Nigeria to provide effective remedies and reparation, including adequate compensation, restitution, satisfaction or guarantees of non-repetition that the Court may deem fit for his unfair prosecution by the Respondent.

At an earlier hearing, the Court had struck out the second Defendant, Cross River State from the suit, not being a proper Defendant before the Court and for not being a signatory to the ECOWAS Revised Treaty.

However, the 1st Defendant, Federal Republic of Nigeria which is a Member State of ECOWAS and a signatory to the ECOWAS Revised Treaty, through their Counsel Chijioke Amadi filed and adopted his preliminary objection arguing that the person on whose behalf/interest the Applicant instituted the suit has been granted bail and is currently being prosecuted at a competent municipal/domestic court of the 1st Defendant on criminal allegations bordering on treason and terrorism.

The Respondent further argued that the Applicant failed to disclose a reasonable cause of action to be entitled to the reliefs sought nor discharge the evidential burden placed on him in proof of his case and therefore asked the Court to dismiss the suit.

Also on the panel of the Court are Hon. Justices Dupe Atoki and Januaria Tavares Silva Moreira Costa.