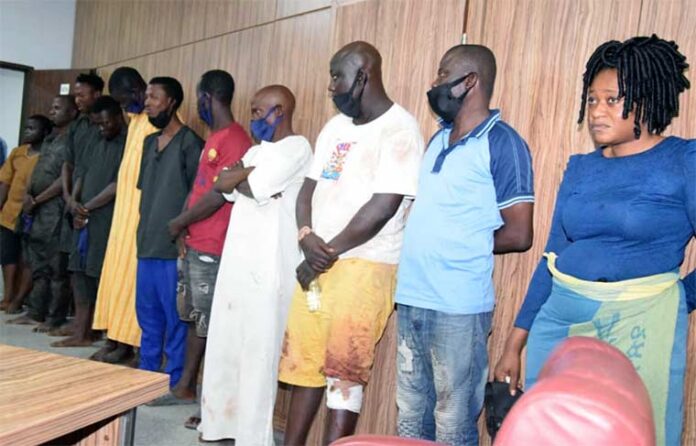 There was a mild drama at the Federal High Court Abuja on Monday as the court tried to identify the 12 detained aides of Sunday Adeyemo, popularly known as Sunday Igboho.

When the matter came up before Justice Obiora Egwuatu, the DSS only produced eight of the detained Igbobo’s aides in court. The produced aides consisted of seven males and one female.

Recall that The PUNCH had earlier reported that Justice Egwuatu had ordered the DSS to produce all the 12 detained aides.

However, at the last adjourned date when the DSS failed to produce them in court, the DSS lawyer, I. Awo, had told the court that some of the names on the court order were different from the names of the persons they had arrested on July 1, 2021 at Igboho’s house.

On Monday, the lawyer for the detained aides, Pelumi Olajengbesi, applied to the court for leave to amend his processes before the court to reflect their correct names.

Counsel to the DSS, I. Awo, did not oppose the application for leave to amend the processes..

But he argued that the order as prayed by Olajengbesi was pre-empting the court as the court has the discretion whether to grant or refuse the application.

He also adjourned the matter to August 4.

Meanwhile, the lawyer representing the 12 detained aides of Sunday Igboho, Pelumi Olajengbesi, has condemned the harassment of journalists at the Federal High Court, Abuja on Monday.

Olajengbesi expressed his displeasure in a statement titled, ‘SSS harassment of journalists in court premises’ issued on Monday after the suit by the detained Igboho’s aides came up in court.

“I condemn in totality the brutal harassment of journalists and media personnel by operatives of the Department of State Services this morning at the Federal High Court, Abuja.”