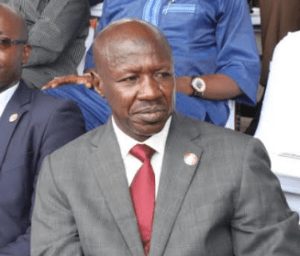 The Department of State Services (DSS) has refuted some media reports that it arrested Ibrahim Magu, the acting chairman of the Economic Financial Crime Commission (EFCC).

This was contained in a press statement made available to NAIJA LIVE TV in Abuja on Monday by Peter Afunanya, the Public Relations Officer, Department of State Services.

The statement titled; “OFFICIAL: Magu is Not Arrested by DSS” stated; “The Department of State Services (DSS) wishes to inform the public that it did not arrest Ibrahim MAGU, Acting Chairman of the Economic and Financial Crimes Commission (EFCC) as has been reported by sections of the media.

“The Service, has since, today, 6th July, 2020, been inundated with enquiries over the alleged arrest.”

However, NAIJA LIVE TV reliably gathered that the acting chairman of the EFCC, Magu, is being grilled by a panel set up to investigate alleged infractions against him.

The panel is sitting at the Conference Centre of the Presidential Villa (Old Banquet Hall) Abuja. Recall that the Attorney General of the Federation, AGF and Minister of Justice, Abubakar Malami had recently written to President Muhammadu Buhari on why the EFCC boss should be replaced having been rejected many times for confirmation by the National Assembly.

The former Director-General of the Department of State Service, DSS, Lawal Daura had also written what was said to be damaging report against Magu to the senate.

Meanwhile, journalists who went to cover the event at about 3.20 pm, were turned back by security personnel. Even when the journalists who cover the State House decided to go to the press center at the Old Banquet Hall, they were politely told to excuse the place for a while.

“They said you people should excuse the use of this place for today,” a security official detailed to the venue, politely told reporters.

“Women Need To Make Men Suffer Before Marrying Them...