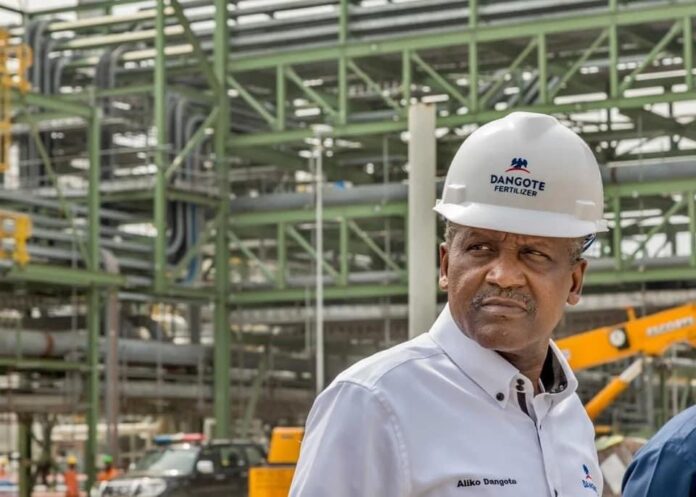 Strong indications have emerged that refinery licensees in the country are wary of making further investments in the refining of premium motor spirit (PMS) popularly known as petrol in the wake of the 650,000 barrels per day capacity Dangote Refinery billed to become operational from next year.

NAIJA LIVE TV findings revealed that the licensees are not willing to inject funds into such a product due to the massive refining capacity of the Dangote refinery, which they believe will completely take over the domestic market, where  their own refining capacity is in no position to compete with it.

This is besides the fact that the sector is still regulated and cannot guarantee return on investment.

An operator who craved anonymity told NAIJA LIVE TV that it will be a waste of resources to refine petrol that is largely imported with the government specifying how much a liter should be sold.

She further said that when the modular refinery project initiative was envisaged it was not considered that the Dangote Refinery would be allowed to operate at a free zone with a whole lot of tax exemptions.

“How do we compete in this environment with a refinery of 30,000 barrels of oil a day capacity competing in the same market with a big refinery of about 650,000 bpd. There is no special incentive for us to engage in this business and I can tell you that is why those already in business are refining diesel and kerosene,” she explained.

By the average of 159 litres of refined products per barrel of crude oil, the 650,000 barrels per day Dangote Refinery will produce an estimated 103.35 million litres of petrol per day.

This is far more than Nigeria can consume going by official figures, which puts Nigeria’s daily consumption at between 50 to 60 million litres of petrol per day.

The Chairman and Chief Executive Officer, Integrated Oil and Gas Limited, Emmanuel Ihenacho, in his explanation told LEADERSHIP that production process begins with the configuration of the refinery which has a combination of both nafta, diesel, kerosene and petrol.

He said it is all about the crude and configuration of the refinery that brings out the specific products.

Responding to the issue, spokesman of the Department for Petroleum Resources (DPR), Paul Osu, said licensees are at liberty to take decisions based on economic consideration.

On whether such licencees risk sanctions, Osu responded, “the issue of sanction does not arise in this matter because whatever you choose to refine is purely your economic and business objectives”.

In his reaction, former director general of the Lagos Chamber of commerce and Industry, LCCI, Muda Yusuf argues,

“The decision of investors in modular refineries on the choice of products to produce is purely a business decision. This would have been informed by the business model they have chosen to adopt. ”

He stated further that the primary essence of private  investment is to get good returns on investment.

According to Yusuf, the business model would therefore be shaped by the prevailing regulatory, policy and competitiveness environment.

“The current policy regime in the petroleum downstream sector does not encourage the production of petrol because of the subsidy.  The logical thing to do is for investors to focus on those segments that have been deregulated.

“Secondly, competitiveness is key in investment decisions.  It will be difficult for a modular refinery to compete with a mega refinery such as the Dangote refinery,” he said.

According to Okoronkwo,  the market is huge for Dangote to fully satisfy.

“We should not limit our capacity to local consumption. The West African countries need the product so we should eye export of petrol rather than abandoning projects that can help Nigeria generate foreign exchange, create job opportunities and build capacity”.

Over the last four decades, Nigeria has consistently struggled to keep its refineries functioning optimally.

However, despite having a nameplate refining capacity that exceeds demand, Nigeria ranks as the 3rd highest importer of petroleum products in Africa, importing over 80 per cent  of products consumed.

In spite of the setbacks, the inherent opportunity for Nigeria’s erstwhile dormant refining sector holds bright prospects for the future and a recognition of key drivers will accelerate the imminent refining revolution.

In line with its policy to upscale domestic refining, the federal government envisaged amongst others, the modular refinery project initiative,  a model that will be private-sector led partnership with equity participation from the state government or its agencies, registered local cooperative societies and the integration of the regional refinery stakeholders, with the private investor having majority equity as well as operate the Joint Venture.

State Government contribution could be in the form of land-for-equity and or paid off shares.

The Department of Petroleum Resources, DPR, had in 2017 issued guidelines for the establishment of modular refineries to encourage indigenous operators in the midstream oil and gas sector.

The DPR, said early this year that there are a total of 38 proposed modular refineries with capacity ranging from 5,000 barrels per day to 30,000bpd, and six conventional plants with a total capacity of 1.35 million bpd.

The agency also expressed willingness to license more modular refineries to come on stream, saying it would put an end to the problem of product scarcity in the country.

The Director, Chief Executive Officer of DPR, Mr Sarki Auwalu, gave the assurances recently after a tour of facilities at the Niger Delta Petroleum Resources, an indigenous oil and gas company in Ahoada, Rivers State.