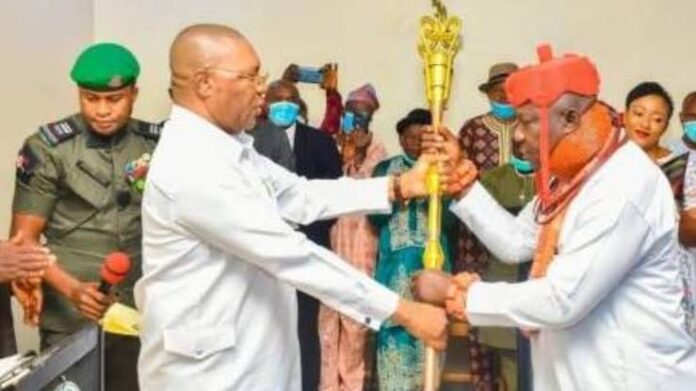 Justice Godwin Briki-Okolosi who presided over the case, also prohibited the Delta State Government from recognising and treating the sacked monarch as head of Ibrede clan.

Daily Report Nigeria recalls that the Delta State Governor, Ifeanyi Okowa, represented by his Deputy, Kingsley Otuaro, on November 25, 2021 presented a staff of office to Oghenejabor as the Odiologbo of Ibrede clan.

In a suit marked A/159/2021, Peterclaver Oke and Maxwell Etoroma sued Oghenejabor, Gabriel Oku, Odio Hitler Oboyano, Attorney-General, Delta State House of Assembly and six others as (defendants) to court over the unlawful selection of Oghenejabor as head of Ibrede clan.

“An order nullifing the purported installation of Augustine Ene Oghenejabor as the Odiologbo of Ibrede clan by the deputy governor of Delta State during the pendency of hearing of this suit and final determination of the suit.

“An order of this honourable court restraining Augustine Ene Oghenejabor from parading himself as the Odiologbo of Ibrede clan pending the hearing and final determination of this suit.

“An order of this honourable court restraining the Delta State Government from recognising Augustine Ene Oghenejabor as the Odiologbo of Ibrede clan and according him the privileges of the office pending the hearing and determination of this matter.”

Justice Briki-Okolosi, in his ruling on Monday, granted all the interlocutory prayers of the claimants.

It was gathered that news ignited wild jubilations among residents of the town on Monday.

Delta 2023: Those planning to disgrace me shall suffer shame – Ex-Gov. James Onanefe Ibori

Students, staff turned back as Delta Poly enforces ‘no bra, no entry’