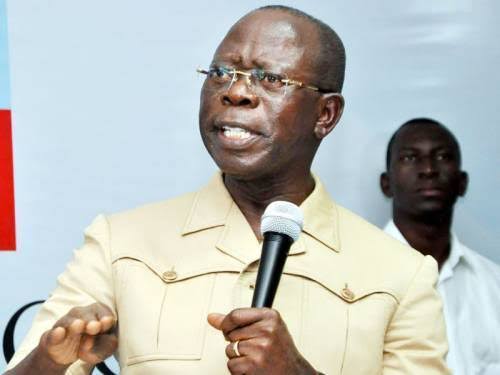 The crisis rocking the Edo state All Progressives Congress (APC) continues to linger and presented itself in another dimension on Saturday as the platform built for speakers and two vehicles in the venue of proposed rally by the supporters of Adams Oshiomhole were destroyed and burnt overnight by unknown persons.

However, the rally, which was meant to receive decampees from others parties into the All Progressives Congress, eventually held.

But addressing a mammoth crowd at Iyekhe off Poly Road in Auchi, Etsako West local government area, Oshiomhole, the national Chairman of the APC said the APC is a party of peace and would continue to preach same even as he assured that the people would win the governorship election in the state.

The over 30,000 were former members of the opposition Peoples Democratic Party (PDP) led by a two-time member of the House of Representatives and the Edo North Senatorial candidate of the PDP, Hon Abubakar Momoh.

Oshiomhole said the party must be integrated from the unit to the highest level “so that as directed by President Muhammadu Buhari, the APC will be a different party. When I was told that they burnt this place last night, I said they should be prepared to put more fire in other places because they can’t stop us.

“But don’t allow anybody to push you to any length that provokes you to fight. Those who think they have the power to fight should channel such energy against the opposition parties. What is happening here should reinforce our conference in God, when God decrees peace, nothing can stop it, when God day it, no man born of a woman can stop it.

“I don’t want to be a national Chairman who will campaign across the country and will not be able to win his polling unit because politics is local.

‘There are people who think that when they reach a high level, they forget the local. I was governor before now I am no longer governor, I am national chairman today, tomorrow I will no longer be national chairman. Let me tell those people in high places that the only permanent place in grassroots politics is a game of numbers not a game for the powerful because on election day all have one vote.

“I want to urge all unit leaders, ward leaders, local government leaders and state leaders to integrate all those who have just joined us”

On his part, Momoh said he has joined with “over 30,000 people who are here from the six local government areas that make up Edo North.

“There are so many others who are waiting for our candidate to emerg after the primaries and they will come and join.’

According to Ihonvbere, I worked as SSG with Oshiomhole for four years, I worked with Governor Godwin Obaseki for two years so I can differentiate between them. Oshiomhole is our leader and we are with him in Abuja and he will continue to succeed.”

Bless Agbomere and other speakers including Akpatason, Iriase all spoke glowingly of Oshiomhole and pledged to support him as National Chairman of the party. (Vanguar