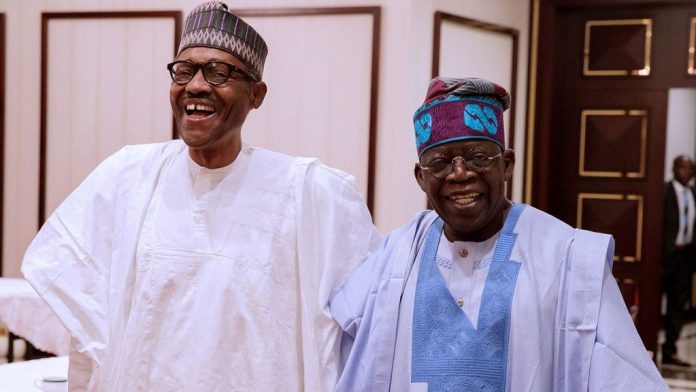 The President’s Personal Assistant (Photograph), Mr Sunday Aghaeze, in a pictorial reports made this known in Abuja.

It was gathered that two of the pictures had shown the President and Tinubu on a dining table with varieties of eatables and drinks while the president was seen in the two other pictures escorting his guest.

Revealed that the sudden appearance of Tinubu at the Presidential Villa had finally put to rest the reported ‘political misunderstandings’ between the president and the Asiwaju.

Tinubu’s absence during the last President’s visit to Lagos shortly before his 10-day private visit to London was misinterpreted in some quarters.

Similarly, President Buhari’s inability to attend 2019 Tinubu’s colloquium at the International Conference Centre, Abuja, to mark his 67th birthday, was squally misinterpreted by some social commentators.

The President, who was represented at the event, by Vice-President Yemi Osinbajo, was on official engagements at the villa where he was inaugurating the new Micro Pension Plan about the same time the colloquium was holding at the centre.

President Buhari usually uses some days of the Ramadan to host political, traditional and religious leaders as well as other prominent and ordinary citizens to Ramadan breakfast at the villa. (NAN)