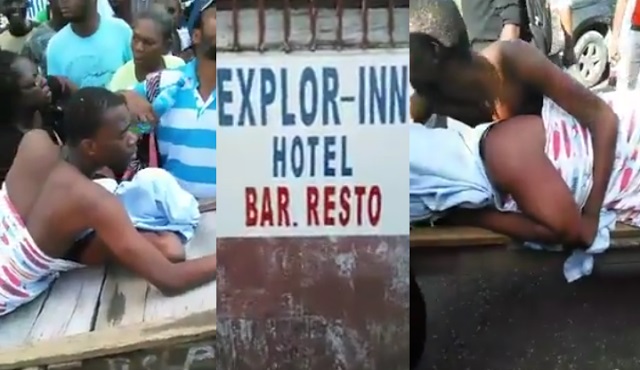 A man and his married lover have been disgraced after they got stuck together while having s*x at a hotel.

The cheating duo caught and dragged along in public

A married woman and her boyfriend got the disgrace of a lifetime after getting stuck during lovemaking. The two who couldn’t endure the terrible encounter cried out for help as people gathered to watch the show.

It was gathered that the woman couldn’t endure the pain after getting stuck and decided to shout for help. The shout attracted the attention of neighbours at the hotel who came to their aid.

They were pushed along the street to the place where they could be separated. But, before that, a huge crowd had gathered to witness the disgraceful incident. The woman used a cloth to cover her face while being pushed.

It is believed the husband of the woman must have used ‘magun’ an African concoction used by a man on his wife to catch her incase she’s cheating on him.

Efiong Akwa: An Administrator with a Midas touch in...