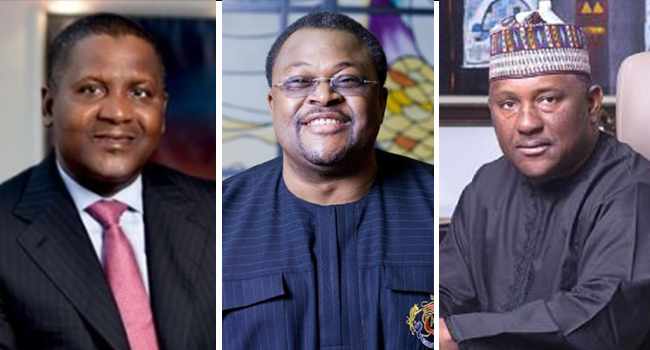 Three of Nigeria’s richest persons made it to the top six of Forbes’ 2021 Africa’s Billionaires list.

Forbes released its 2021 billionaires list on Tuesday, it includes 14 African billionaires, with the President/Chief Executive of Dangote Group, Aliko Dangote, retaining the number one spot on the continent.

Other Nigerians who made the top-6 spot include Chairman of Globacom and Conoil Plc, Dr. Mike Adenuga, and the founder of BUA Group, Abdulsamad Rabiu.

Though Adenuga who is Nigeria’s second-richest person witnessed a deep from $7.7bn to $6.3bn, he remained in the top echelon in Africa placing 5th and was ranked 440th in the world.

With the $2.2bn gain, Mr. Rabiu now sits pretty as the 6th richest in Africa and the 574th billionaire in the world.

Other Africans who made the top-6 category include one Egyptian and two Southe Africans.

The Egyptian, Nassef Sawiris comes in second place in Africa and is ranked 297th on the list with a net worth of $8.5bn.

According to Forbes, Sawiris is an investor and a scion of Egypt’s wealthiest family, with his most valuable asset being a nearly six percent stake in sportswear maker.

Away from Africa, the founder, and CEO of Amazon, Jeff Bezos retained his spot as the world’s richest with a net worth of $177bn. He is followed by Elon Musk, co-founder and CEO of Tesla with $151bn.

Forbes notes that within the year in focus, there were rapid-fire public offerings, surging cryptocurrencies, and skyrocketing stock prices, adding that the number of billionaires on Forbes’ 35th annual list of the world’s wealthiest exploded to an unprecedented 2,755—660 more than a year ago.

According to the business magazine, altogether the billionaires are worth $13.1 trillion, up from $8 trillion on the 2020 list.