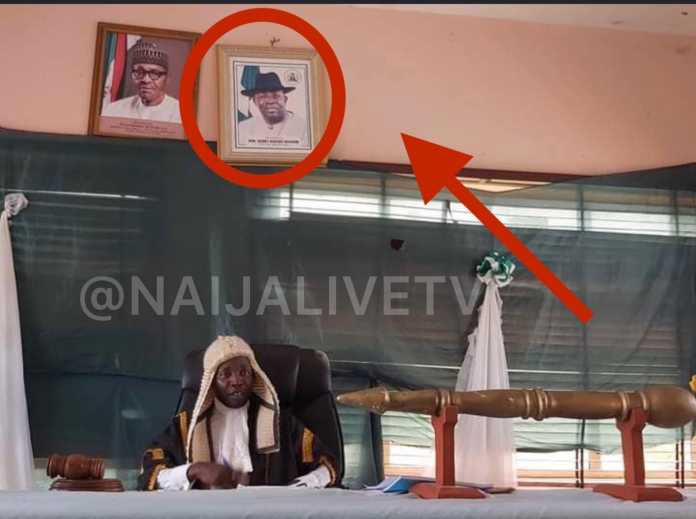 The Sagbama Local Government 10th Legislative Council meeting, Thursday, was received with various forms of criticisms, hurled at the law makers during their course of deliberation on the 2020 appropriation bill. As gathered by NAIJA LIVE TV, the criticisms were centered on the legislators’ use of plastic chairs and tables while observing their august sitting, which many Bayelsans saw as an act of belittlement for office holders of their caliber, considering the fragility of the matter being discussed.

Interestingly, after the criticisms meted at them on Thursday, the legislators decided to switch the venue to one, housing a glamorous set of furniture. However, to the greatest surprise of the public, the newly acquired venue was laced with an eyesore of the official portrait of the Former Governor of the state, Hon. Henry Seriake Dickson, sitting comfortably on the wall of the venue, instead of the current Governor, Douye Diri’s.

In response, many social media users in the state have come out to express their exasperation at the lackadaisical acts of the legislative members. They have also indignantly questioned the ineptitude of the lawmakers in getting a suitably comfy venue for their unique meeting.

As discovered by NAIJA LIVE TV, Bayelsans in their large number have taken to Facebook to relate their displeasure at the lawmakers on the reason the past governor’s portrait was still being seen in such a constitutionally instituted occasion.

In the same vein, NAIJA LIVE TV gathers that the Sagbama Local Government 10th Legislative Council on Thursday received the 2020 Budget from the Executive Chairman, Hon. Alale Prosper and has also completed its 2nd reading.