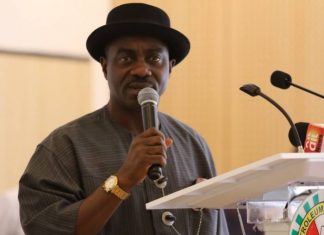 Former Director-General of the Gov. Seriake Dickson Governorship campaign organisation and member of the Federal House of Representative, Hon. Fred Agbedi has dismissed “untenable;e” claims by some politicians in the state that the next Governorship position has been zones to the Bayelsa Central Senatorial district of the State.

According to Hon. Fred Agbedi, there was never a time where elders, politicians and stakeholders sit to decide the issue of zoning or power rotation in the state.

Hon. Fred Agbedi, who is representing Sagbama\Ekeremor Federal Constituency of Bayelsa at the National Assembly and one of the leading Governorship aspirants in the state said those advocating for zoning are ignorant of what they are calling for and that the state is not operated based on first and last born packages.

Agbedi, who led members of his Onward Restoration and Transformation Campaign Organisation, to the secretariat of the Federated Correspondent Chapel (FCC), said people talk about zoning. They asked people of Bayelsa West, what is the matter? They said it the Bayelsa Central turn to produce Governor. The question I ask is that whether there have ever been zoning in Bayelsa? The answer is ‘No’. It is very simple that in leadership, politics and governance in Bayelsa, there has never been zoning in the state.:

The state was created in 1996, we all know that. The state was created by the military. We all know that. We all also know we did not come in democracy. we came through the military that handed over in 1999. In 1999, I had already come back from the Federal House of Representative and was also a member of the founding fathers of Bayelsa. I was also involved in taking Bayelsa people to meet Alhaji Usman Dagogo, the Chiroma of Katsina, who was the deputy Chairman subcommittee on State Creation. in the Nbanefo Panel.’

‘And I challenge anyone to a public debate on the argument about zoning in Bayelsa.if you don’t know,the last election was between the Central and West Senatorial districts. we know the history of party primaries in the state. We know who won the PDP primaries. But the general election was contested by the Bayelsa West and Central. If you zone election, it means all the contestants should come from the area it was zoned to. Because, there was no zoning, people contested from all senatorial districts.’

‘ Some won the primaries and they were denied the ticket and given to other people. Of course,the general election was contested by people from all senatorial district. And you know when Alameiseigha was declared winner of the election. So, where was zoning in 1999. And of course, when Late Alameiseigha had issues, did anybody zone it to Dr. Good luck Jonathan? he was deputy Governor and naturally he stepped in. You cannot about zoning when a man naturally stepped into office. You can’t talk about it.’

‘ So, who or where was zoning? I challenge those people who now say zoning should be respected. For some of us, it is an insult. Maybe, they don’t know what they are talking about. They should come and ask some of us who founding fathers are if they are not founding fathers. They should come and ask us who political leaders are if they are not political leaders at that time. We will tell them the history. In any case, Bayelsa is not a state of first and last born parentage. All the three senatorial districts are equal.’

‘It is only in parentage that you say this man is a first born and the other is a last born. And you say, first born chooses and last born tale last. Who is the first born in Bayelsa? who is the last born? Can anybody tell me? If it is not so,it will be nice for us all to taste first. So, that we can tell the story of the first born tasting first and the last tasting. That is the way to go. Other than that, you know that it is a govt policy of right of first refusal .if you are resident in a house and government wants to sell, you that is resident will be given right of first refusal. It is only when you don’t want to buy, you can deny yourself of such right. The Government of Bayelsa is domicile in Bayelsa west and we have the right of first refusal. And as the last to taste it, we should. That is why we are telling Bayelsa people that we are buying it.’

‘When you talk about zoning, the entire state will sit to discuss. We are the last in the sharing and we will take. Do you know, OSUSU, our traditional contributory scheme. It is not only you that has problem. Every other person has problem. If you take first, then you also want so that the last person should start. So what we are saying is that it is the Bayelsa west. We are saying that Four Local Government areas have produced Governors. My Local Government, Ekeremor, have not produced .likewise, Yenagoa, Nembe and Kolokuma\Opokuma. So, four of us will go into the race. Any of those four should produce the Governor. We should go by elimination. If Ekeremor produces, the next should come from the other three until we will come to ground zero. And we will all be happy that we have had a shot at Governorship.’

Niger Delta SAINT MIENPAMO - January 22, 2020 - 7:10 pm
0
Former Militant groups from the Nine States of the Niger Delta under the aegis of the Reformed Niger Delta Avengers (RNDA) has...

Trouble: Mbaka to be barred from preaching soon –...

“My wife deprived me of sex for 1 year”- husband tells...