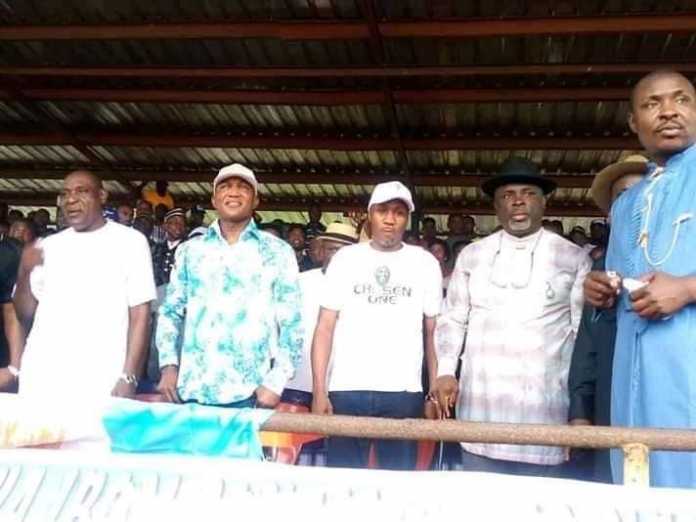 David, who was received at Olugbobiri community, Southern Ijaw Local Government area of Bayelsa state, in a festival-like manner, told thousands of the indigenes that line up the major road in the community to welcome him, that take priority in tackling the developmental challenges in most oil communities in the state.

A press statement sign by his media adviser Chief Gift Ebiki said the volatile flood Waters in the river and the waves became calm, the community came alive with the ping and pingatry to receive David Lyon. it was like the triumph entry of Jesus Christ the story in the Bible during his entry, into Jerusalem the city of milk and honey  which are the same qualities in olugbobiri community

Indigenes of the community has defiled the heavy downpour to received their illustrious son in a festival-like manner with colorful display of love boat and masquerades in their different traditional regalia.

Speaking to the enthusiatic crowd, he said, you can see that the volatile flood Waters in the river and the waves became calm, you see how the the community has came alive with the pomp to receive our entourage, this clearly show our acceptance.

“That’s why we must do everything we can to bring smiles to faces of people in the oil bearing communities, they have endured enough suffering while those in power continue to waste our money. This must stop now, we must make a change and ensure that money meant for oil bearing communities from the 13 percent derivation fund are judiciously used for the development of such communities.”

He used the occasion to officially inform the community that he is the authentic candidate of the APC for the November 16th election’ and urge them to be more prayerful and united to ensure he becomes the next Governor of the state.

Also speaking, Preye Oseke, a member of the House of Representatives, thank the people of Olugbobiri kingdom, for giving birth to a worthy son like David Lyon, whom he said is the lion of the tribe of Bayelsa.

He urged the community to be more united to vote massively for David Lyon come November 16 gubernatorial poll to be able to enjoy the dividend of democracy which has remained elusive for 20 years of PDP misrule in the state.

Breakdown of Confirmed COVID-19 Cases in Nigeria by States...